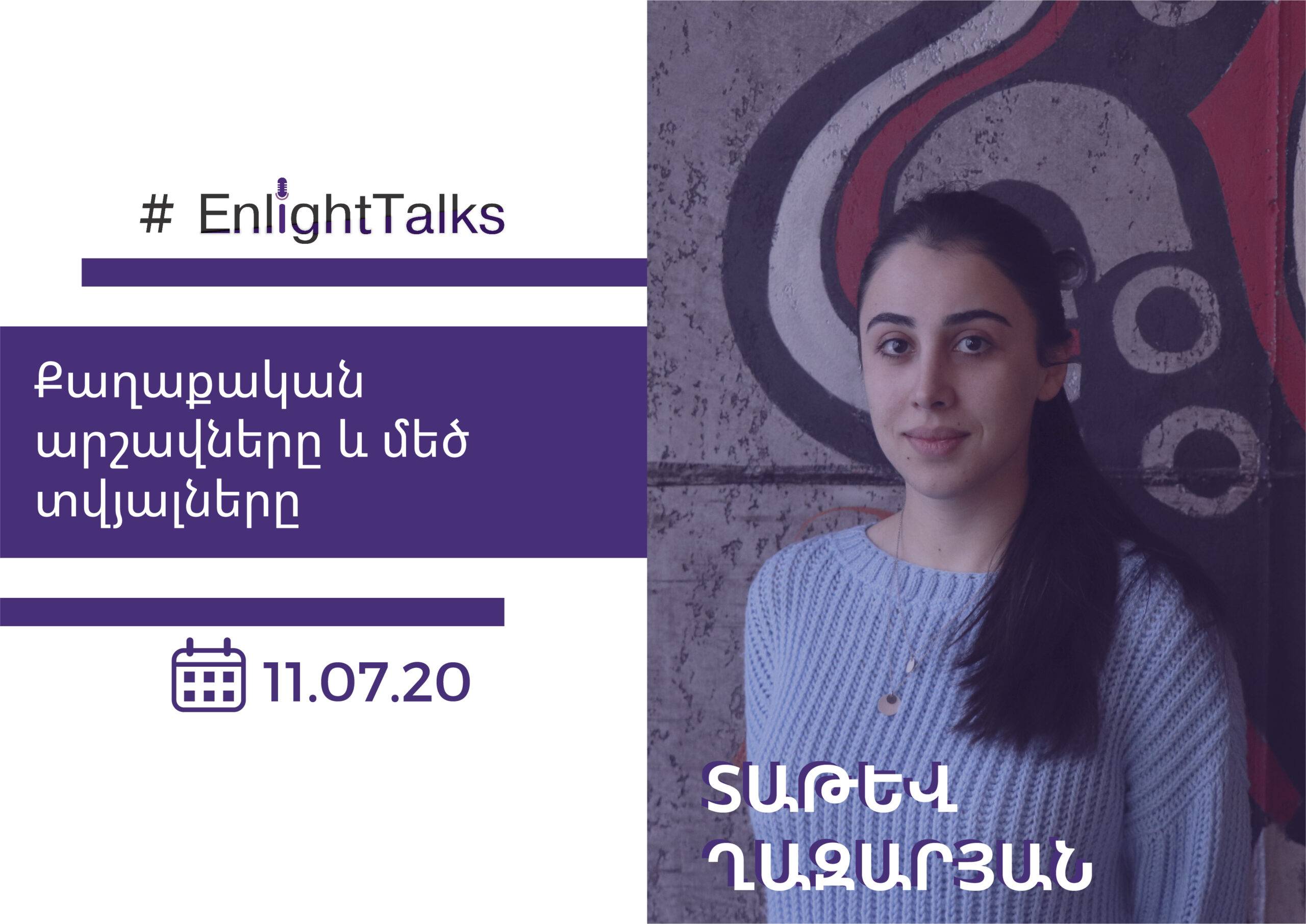 On July 11, on the scope of the analytical internship, Enlight’s analyst,  specialist on international relations and political science Tatev Ghazaryan’s discourse on the topic of “Political campaigns and Big Data” took place.

Talking about the ways of predicting the voters’ behavior, she introduced numerous models that predict its- behavioral model, sociological model, psychological model, cognitive model. Based on these models, various strategies have been created in political campaigns, such as a social-economical approach, a model of an ideal candidate, concentrating on the problems, combined, advertising addressing approaches.

Talking about the election fight for votes the speaker quoted, “The elections are done in a neutral zone by pursuing more hesitating ones than the opponent succeeds to do”. For leading right those neutral groups to their side, some targeted groups receive particular messages. And here, Big Data and contemporary technologies come to help. Big Data are related to the big, diverse series of information that continuously grows at a high rate. They include information size, the speed of creating and collecting it, and also the included data diversity. Over time, they also started suggesting different characterizing things for Big Data, such as variability, value, veracity, ampleness, correlation, completeness, etc.

Then the speaker talked about how Big Data are saved in politics, how they are used, and how computerized training affects the decision-making process. She particularly referred to the research about the usage of  data in  politics conducted by a corporation dealing with Data Science in Berlin. The latter studied the political events that happened during the recent years and developed models on how the data are saved in politics. The data in politics are viewed as political-active, political guideline, and political influence. The first one includes political data, public data, customer data, discovered data.

As a political guideline, data include information about the kind of the person, what he or she talks online, what interests he or she has, what he or she responds to. About this, the speaker referred to the work of the system called tracking pixels.

As a political influence, data include information about who the person is, where he or she is from, what he or she is looking for, what he or she is watching or reading online, who he or she knows. Those things are recruited and saved by different apps and other computer actions. As a result, it’s likely to take out models of behavior that are also used  in the electoral processes. For instance, Barack Obama, using similar data, was able to contact the parameters between people’s previous vote and their economic conditions. With the help of this, groups of people have been created, and to influence them, there have been formed some models.

You can get acquainted with Tatev Ghazaryan’s analytical articles by following this link.