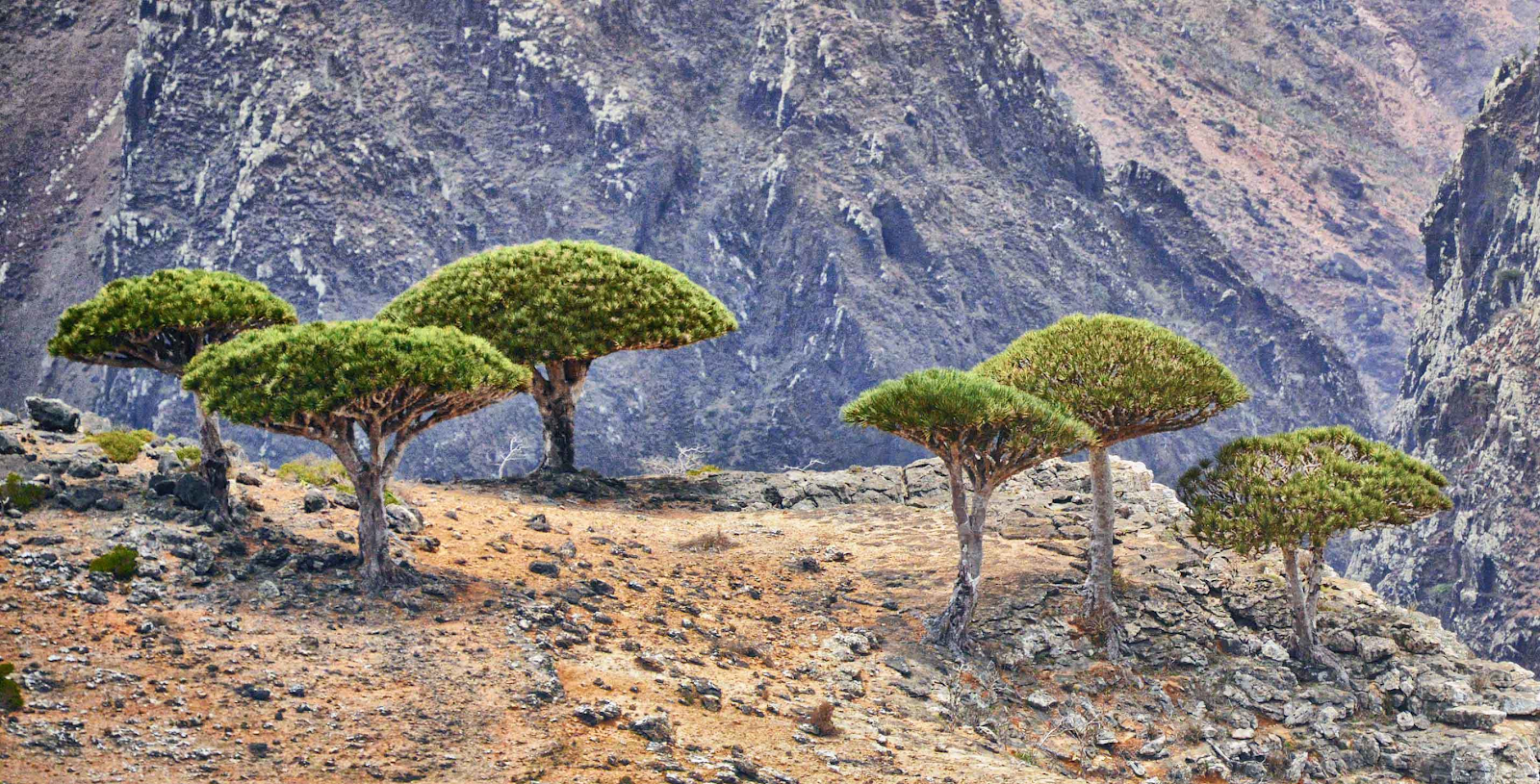 The blood of the two brothers

According to Yemeni legend, the dragon blood tree (pictured above) first grew on the place where two brothers – Darsa and Samha – fought to the death, similar to the Bible’s Cain and Abel. In Arabic, it is known as Dam al-akhawain – “the blood of the two brothers”.

This unique tree has become a widely cherished symbol of the island of Socotra, a place once called “the most alien-looking place on Earth”. It has been described as a “wonderland” due to its exotic mountains, valleys, plains, caves, and beaches. With its incredible array of unique flora and fauna, UNESCO named the island a World Natural Heritage site in 2008 . There are 750 species of plants on Socotra, 270 of which are endemic to the island, that is to say they only exist here.

The war in Yemen

Today, Socotra, which is part of Yemen, has found itself caught in the middle of a power struggle between the United Arab Emirates (UAE) and the Abdrabbuh Mansur Hadi-led Yemeni government.

Yemen is in the midst of a terrible civil war which has devastated the country and led to famines and cholera outbreaks. The war is multi-sided with many differing factions but is mainly fought between president Abdrabbuh Mansur Hadi and his allies on the one side, and the Houthis and their allies on the other.

One of Hadi’s allies in the conflict is the United Arab Emirates which the Hadi government is dependent on for military power, but the UAE’s encroachment on Socotra has caused a rift between the two allies.

Yemen’s six-year-old civil war has been brought to Socotra’s shores and the island’s 60,000 residents are caught in the middle. After many decades of isolation, the people of Socotra are being forced to choose between two sides in a conflict that until recently has been fought on the Yemeni mainland, hundreds of kilometres away.

Although there are tensions between the Hadi government and the UAE, many political analysts have interpreted the UAE’s interest in Socotra as a challenge to Saudi Arabia. This would make Socotra the epicentre of a new power struggle, as the UAE strives to establish a modern military empire to rival Saudi Arabia’s regional dominance.

It was reported in the media that president Hadi, before fleeing the capital Sanaa in 2015 as the Houthis took control of the city, leased the island to the UAE for 99 years.

Why would the UAE be drawn to Socotra? Both for military and economic reasons. The island is strategically located at the gulf of Aden and has become a base for launching strikes against the Houthis on the Yemeni mainland. Alongside this has been the UAE’s growing importance in the arms and weapons trade, it being “the eighth-largest arms importer in the world in 2015–19”, allowing it to military intervene in both Libya and Yemen.

Going hand in hand with building a military base in Socotra, the Emiratis have also invested in the local infrastructure, building schools, hospitals and roads. Some Middle East analysts claim that the UAE is planning to annex Socotra, by holding a referendum on whether Socotris would like to secede from the mainland and officially become part of the UAE in a Crimea-style vote.

As for the broader economic and geopolitical perspective it is possible to see this as the UAE trying to establish trans-regional hegemony, or dominance in other words. Along with expanding into Yemen the UAE has also extended its influence in Eritrea, Djibouti, Somaliland and Sudan – all countries which touch the Red Sea, the world’s most important oil and gas shipping channel. While already having a port in Jebel Ali – the biggest port in the Middle East and one of the busiests ports in the world – the UAE has begun monopolising other ports in the Gulf and the Red Sea as well, trying to counter both Iranian and Saudi Arabian hegemony. As such, its adventure in Socotra should be seen as a strategic move designed to protect both its economic and military interests.

The people of Socotra

Socotra has until recently been almost completely isolated from the outside world. There are roughly 60,000 inhabitants living on the island. While belonging to Yemen, an arab country, the inhabitants of the island speak Socotri, a language that is older than Arabic. The islanders rely mostly on fishing and planting date-yielding palm trees, and until now, there has not been much chance of contact with the outside world.

How do the island’s inhabitants feel about the UAE encroachment on Socotra? For some, life has become better. Some Socotris feel neglected by the Yemeni government, and therefore welcome investment by the Emiratis. As well as maintaining a local army of 5,000, the Emiratis have also created essential infrastructure (roads and schools) as well as paying the salaries for doctors and police officers, creating new job opportunities. Some Socotris are allowed work permits to go work or study in the UAE.

But anti-UAE sentiment has also become widespread, with some saying that the Emiratis are destroying their old way of life. “Since the year 2000, nearly 70 percent of the Socotra archipelago has been protected by a UN plan as a natural reserve, prohibiting construction on much of the island.” Much of the land has been bulldozed in preparation for construction of hotels and other such tourist infrastructure.

Aggravating this sentiment is the secrecy and lack of transparency from the UAE about their plans. They seldom ask the people of Socotra for their input, and the public is only told of the Emiratis’ plans for future development and military deployment when it is revealed by foreign media.

Once a quiet place living in harmony with nature, the Yemeni civil war has been brought to its shores. According to biologists “Socotra’s unique environment is already suffering the effects of climate change and overgrazing. Human development on a large scale could tip one of the world’s last pristine ecosystems beyond the point of no return.”

The last year has seen some dramatic changes on the island. In June, the UAE-backed Southern Transitional Council – which is a separatist group who wishes to secede from Yemen and form a Southern Yemen – seized control of the island.

What the future holds next for Socotra is difficult to say, but whatever it is it will be related to what happens next in the Yemeni civil war.