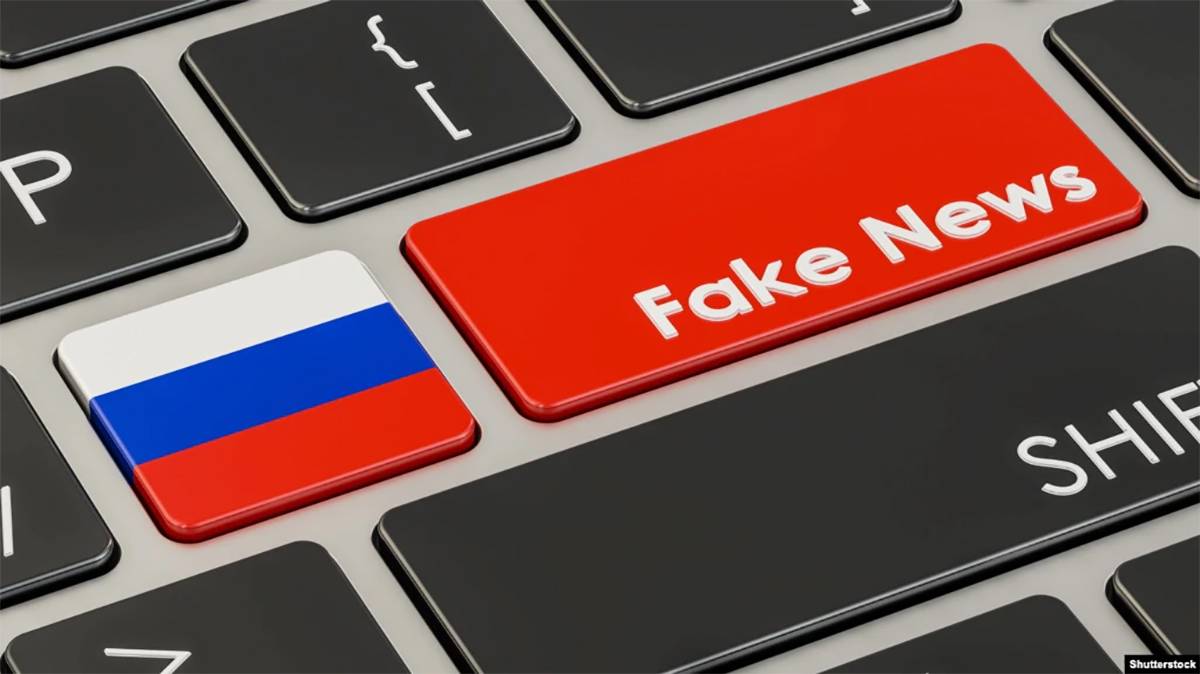 The Russian regime has many times been accused of disseminating fake news stories and misinformation. The question is not why or how, but rather to ask what is the aim of this. I wanted to dig deeper into this subject and therefore interviewed Susanne Oxenstierna, who is currently working at Sida (Sweden’s government agency for development cooperation) and who studied this phenomenon.

An argument is that it may be viewed as a way of projecting soft power in order to destabilise other countries. One way of exercising such power is through the use of GONGOs (government-organised non-governmental organisations), which the Russian political elite is believed to be doing to influence public opinion in the West.

Susanne Oxenstierna is a deputy research director at the Swedish Defence Research Agency who is currently working in the unit for eastern Europe at Sida. Some of her previous research focused on Russian GONGOs and their respective ties to the political elite in Russia. In 2017, she published a study together with her colleague Carolina Vendil Pallin titled “Russian Think Tanks and Soft Power”. Nine different think tanks were studied in depth in order to see how Russia used public diplomacy and soft power for the purpose of influencing and reshaping political views in targeted countries. These think tanks all had ties to the Russian political elite and were funded, either directly or indirectly, by the Russian state. Think tanks can be defined as a group of experts working together to develop ideas in different domains and to then suggest courses of action. Think tanks can in some cases be brought together by a government, such as in the cases studied by Oxenstierna and Vendil Pallin.

Soft power can be defined as: “the use of a country’s cultural and economic influence to persuade other countries to do something, rather than the use of military power”. This is a relevant mechanism which countries such as Russia can use in order to shape its image among Western states. Soft power is therefore closely linked to Public diplomacy, which is defined as: “an international actor’s attempt to manage the international environment through engagement with a foreign public”. In the case of Russia, a large portion of the country’s political leadership operates on the basis of the assumption that negative opinions about the Russian state can be explained by the global dominance of Western media. Western media, in their opinion, tends to favour anti-Kremlin narratives.

Sweden, as many other Western states, has been subjected to fake news. In 2017, the Swedish Radio reported that Russia over a period of two years had coordinated a campaign aimed to influence Swedish decision-making. Trolls on the internet were targeting journalists and academics on social media, and mainstream social media channels attributed to spreading disinformation, either knowingly or unknowingly. Some of these fake news had nothing to do with Sweden, per se, but rather focused on other narratives. For example, the spreading of alleged “evidence” of NATO opposing the UN; lobbying on behalf of Western states for Ukrainian politician Nadia Savchenko to become Secretary General of the UN; and German politicians conspiring against Turkey using Kurdish proxies.

In this interview with Susanne Oxenstierna we discussed Russian GONGOs in the West and crucial aspects that are important to keep in mind when trying to understand the modus operandi of such organisations. This discussion also involves whether or not think tanks of this kind can be an effective way for a foreign power such as Russia to spread fake news and, in so doing, destabilising Western states.

Russian GONGOs can be seen as NGOs on the outside but are really driven by the Russian state. What kind of threat do you see on part of such organisations? Can they be effective in their way of shaping a more positive opinion of Russia in the Western World?

– What they can do is influence the public opinion in the West. Organisations that use fake information are able to affect the public opinion. People who are not so well informed may believe in these fake statements. So there is a threat or a risk with that.

In terms of how effective they are in shaping this more positive view of Russia, that depends. Some of these think tanks are very propagandistic so there are very few people that believe in what they say and for that reason they are not very effective. But there are of course very well-known experts that have ties to these think tanks. Their way of expressing these political Russian views are more subtle so you have to be careful and really listen to what they are saying. The message can be hidden in statements that do not appear to be so provocative.

With regards to the think tanks that are operating in the field of security and foreign policy it is primarily Russia’s position towards the United States and the European Union, international relations with the other big powers which is discussed.

Do you see any tools which the Swedish state might have in order to verify whether Russian think tanks work on behalf of the Russian government or whether they are more objective in a sense?

– I do not think that the state as a unit can do very much about this issue. But you have researchers and analysts who can analyse what these think tanks are doing and which experts are transmitting such views. I think that nobody who is knowledgeable about Russia would believe that these think tanks are independent because, as you already mentioned, they are all to some degree dependent on the state. Having that in mind even people outside of the research community can analyse what they are saying.

Have you noticed any areas or topics that are especially used by the Russian government to, through the use of soft power, influence a more positive picture of Russia abroad?

– I have only worked with security policy-related think tanks and they are prevailing. They are disseminating the official view of the Russian state with some variations. But for instance relating to the topic of Russian aggression against Ukraine we have think tanks that say that this was because of a conspiracy on part of the West as to why this occurred. Then there are other think tanks that are more soft and claim that this is a sort of misunderstanding of the Russian need for security.

Is it easier to look at the affiliations between the people in question, what kind of ties they have to the different people within the political elite, rather than to just look at the financial numbers? In order to gain further insight into funding.

– Yes, and you have to look at it case by case. There are different things that matter in different cases. But we used the internet and interviews to try and cast a light on this. And in some cases there is quite comprehensive information about funding and how these GONGOs are financed. At other times there is very little information available on this particular issue.

Russian legislation from 2012, especially the “foreign agent law”, implies that organizations have to rely to a large degree on state funding in order to be able to operate. Did this change the way in which these GONGOs present their sources of funding? Will they try to cover up their ties to the Russian authorities more than they have already done so far?

– No, they do not cover that up. Some of these GONGOs have got the right to distribute grants. They get money from the state and then they can distribute this money into other NGOs and other organisations. They do not hide this fact. It also depends on what they are doing. Some of these organisations are social and most of the registered NGOs in Russia are social. They work with vulnerable groups and it does not matter so much if they have to state that they are behind the official line on how Russia is behaving in Ukraine for instance. Because it is far from what they are doing themselves. But of course with these organisations that are more security policy-oriented, it matters. Sometimes this law has resulted in them being unable to act in Russia, and therefore had to move out of the country, in other cases they had to close down completely.

The first so-called “foreign agent” law was introduced in Russia in 2012. It targeted NGOs along with charities and civil society organisations (CSOs) which received funding from abroad and took part in political activity in Russia. Since 2020, various groups and individuals have been labelled foreign agents. They now have to put a special label on publications, marking them as produced by foreign agents, and are obligated to report their activities to the government. They face fines if they do not comply. In order to be labelled a “foreign agent”, one has to produce or spread material which comes from a “foreign agent” media source and receive funding from abroad.

Such legislation further affects freedom of speech and serves as a way for the regime to discredit any individuals or groups which have any ties to foreign actors. By default, this also impacts the possibilities of receiving funding as an NGO working in Russia. More and more organisations depend on government funding and will therefore be subjected to more control and persecution when not complying with the official state narrative. By repressing CSOs the regime effectively controls the opposition and the public has the power to shut down and punish those who do not support the regime or who dare to speak out. Statistical data on the core civil society index for Russia shows a decrease in the robustness of civil society in the country, successively decreasing since 1999 when Russian President Vladimir Putin came to power.

The core civil society index from the Institute of Varieties of democracy (V-dem) “provides a measure of a robust civil society, understood as one that enjoys autonomy from the state and in which citizens freely and actively pursue their political and civic goals, however conceived.”

With greater control of NGOs abroad, the regimes possess more tools to use soft power and influence the way in which their aims with public diplomacy are perceived. One way of measuring subjectivity can be to verify affiliations that different think tanks have to the political elite in the Kremlin. When verifying the funding and connection of the given source to the political elite, one starts to get a more objective picture of how public diplomacy can be forwarded through the use of think tanks and GONGOs.

Read more about GONGOs and civil society in Russia here: