“The caricature is like a naughty boy who can attack anything”, writes the Turkish caricature investigator Baran Sarıgül.In today’s Armenia, this genre has evolved through Medialab’s political caricatures, which has brought together a group of previously separately experienced and newly known caricaturists, which regularly posts caricatures on the site and keeps the tradition of caricaturing in Armenia fresh.

The political caricature has similarities with several other communication media. And although often it is sometimes rightly identified with them, however, some characteristics make this genre different from its adjacent “crony” spheres. Discussing these differences and similarities will reveal the role of political caricatures in a new way by refining its functions and features in the current situation in Armenia. Is caricature malice or criticism, a factual distortion, or a deliberate subjective interpretation of the message, a part of art or mass culture?

Mikhail Bakhtin writes in one of his articles that in the folklore of the primitive peoples beside serious worship there were also funny ones։ sneering and defaming the divinity, next to serious myths, ludicrous and reproachful myths, beside the heroes, their mockery counterpart-imitations. Similarly, the caricature is an alternative next to serious news, as defined as possible, the contrast of news and analysis devoid of emotions and imaginative wanderings of the author.

If the news media covers the news, the political caricature just attacks them. One is reporting news, the other is playing it, and eventually, both affect the public opinion. The attack on the news is organized as follows: the cartoonist selectively, one can say, “mischievously” takes any news, definitely fresh, and creates a humorous message from it. He “sends to hell” media objectivity, gets something “poor of neutrality” from any neutral material, cuts the news in some places, removes unnecessary details, adds and exaggerates in other places, and in unknown, non-available places makes up something and desirably funny. Specifically: “The third president’s brother’s, Alexander Sargsyan’s son, Narek Sargsyan, was found out, the police press service informs. When discovered, he presented a fake passport of Guatemalan citizen, with Franklin Gonzalez’s personal data” this neutral news story was metamorphosed by Vahe Nersesyan’s “Gonzalezes’ Gang” caricature, where the dry facts reported by the media are spiced with new details, enriched exaggerations and importing new characters outside the news. This caricature is a narrative built on the news, with the release of the not serious side of the fact, with displaying the author’s attitude, with the cartoon characterization and simplification of figures.

Such “degeneration” and distortion of the news, arbitrary exaggeration at any point and lack of objectivity can be a source of connection between the caricature and the yellow press; however, unlike the unsubstantiated news of the latter, the caricature is based on truth and plays on the wires of the truth, not on sensation. The fiction is delicate and in detail. The news for the caricature seems to be incomplete and needs to be filled with imagination. For example, the caricature called “Musical Mailbox” is fictional. Pictured is the host of the same named program,who received a letter from a Russian resident, Vladimir (the choice of the name is not accidental) and congratulates Robert Kocharyan on the New Year and requests the song “Life is not possible to turn back” as a gift. The punch line of the caricature is the song’s lyrics. Naturally, such a musical request was not really in the program.From the point of view of accuracy, this is misinformation but woven on reality. The truth here is two.Firstly, Vladimir Putin supported the second president of Armenia at the level of statements, but only symbolically, secondly, Kocharyan’s life is no longer as it was before and possibly judging from the course of events it never will be. 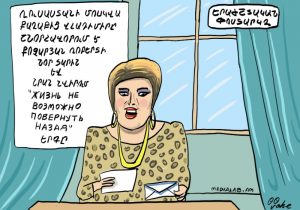 Partial truth is also characteristic of the yellow press, but the latter is lacking society-driven positioning. In contrast, in the heart of political caricature are the wrinkles of society. The media also touches on social issues.However, one gives strict seriousness to their work: carefully removing ludicrous sides of the news (except for humorous magazines, programs), the other reserves the right to be light-minded (and is forgiven for it) for voicing those issues when addressing public and political figures. One is often official and the other one is unofficial or if you want: anti-official. That is the difference between the written news media and the caricature.

The news outlet sometimes reports official, sometimes anti-governmental news, and often does independent investigations. The news is distributed from different points of view for impartiality. And the caricature is not restricted by impartiality and is always on the public’s side, the beneficiary of the criticism and opposition is the society: the ones being ruled. The laughing side is the society, the comical one – mainly the “elite” or the privileged minority. The news is “mocked” as a way of bringing comfort to the hearts of the people, giving them leisure of amusement, for overseeing them by mockery.

In this sense, the political caricature is always an opposition; one can say one of the eternal “oppositions”, which does not threaten to become pro-government. If the parliamentary opposition can become government and lose its criticism (the same can be with an oppositional newspaper or a magazine), as it happened in Armenia, the caricature cannot get rid of criticism. Caricature: a mockery image, losing its mockery, i.e. criticism and sarcasm, ceases being a caricature. Here is the longevity of its oversight function (along with other actors performing critical functions), because criticism is what keeps the current government under control.

Criticism is a test for the political caricature, the caricature must always be “in the fight” against the established, the unjust. In Armenia, not only the revolution was able to constrain the criticism of the caricature (no matter how strange it is, the victorious revolution is a threat to the caricature, as it can turn the caricature into only a glorifying instrument for the revolution), which would exhaust the effect of caricature as a genre,but also Nikol Pashinyan with his team became the “beloved” hero of the present-day caricature exploration, and the current authorities are now almost the same target of criticism as the former, by which the caricature kept the critical positioning of serving the interests of the society. 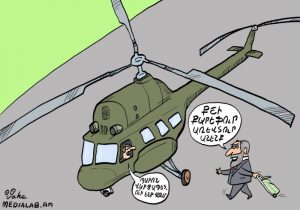 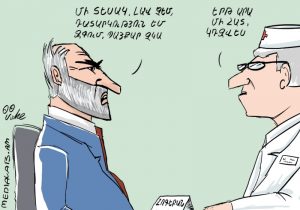 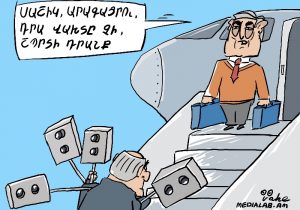 But the caricature has one peculiar feature. It criticizes by amusing (or amuses by criticizing), unlike critically acclaimed experts, associations, institutes, and art practices. If we take the caricature criticism at the starting point, entertainment will become just a means of resistance and one of the means to reach the audience, a spark that flips the criticism, with which the caricature will approach the political art and become a component of it, receiving the title of high art. In this case, the laughter that is being caused is viewed as a not self-purpose result. And if the dominant feature is fun, the purpose: happiness, and the criticism as a way to have fun, then the caricature will only become a display of mass or popular culture quickly digestible way to quickly accommodate the consumer entertainment needs of fun-loving masses.

The choice between these two positions, the obsolete necessity of distinction between low and high arts is the issue of a particular critic’s taste. But it would be primitive to think that political caricature is purely a source of entertainment, without taking into account its social commitment. This distinction is the reason why the study of caricature as an art form in state institutions is not greeted well, humour: as a means of artistic creation, is largely excluded from such institutions. Nevertheless, the introduction of caricatures in the exhibition halls (“Voices and choices” exhibition that exhibits political posters [i], for example, also presented several caricatures) has already legitimized this genre in newly-independent Armenia as an art, whether low or high.

Nevertheless, the current Armenian political caricature, more than any other type of political art, considered to be a form of high art, is more sensitive to public disorders and responds to events with exceptional speed, just like mass media or social media comments. True, it is often justly accused by the fact that it is a quickly consumed material, but in it lays the secret of reaching out to the public and, consequently, the power of its influence.

[i] “Dzninaghbyur: The (anti)Aesthetic aspects of the Swiss and Armenian political posters” took place in 2018 from June 29 to July 15 in the former building of the Ministry of Foreign Affairs