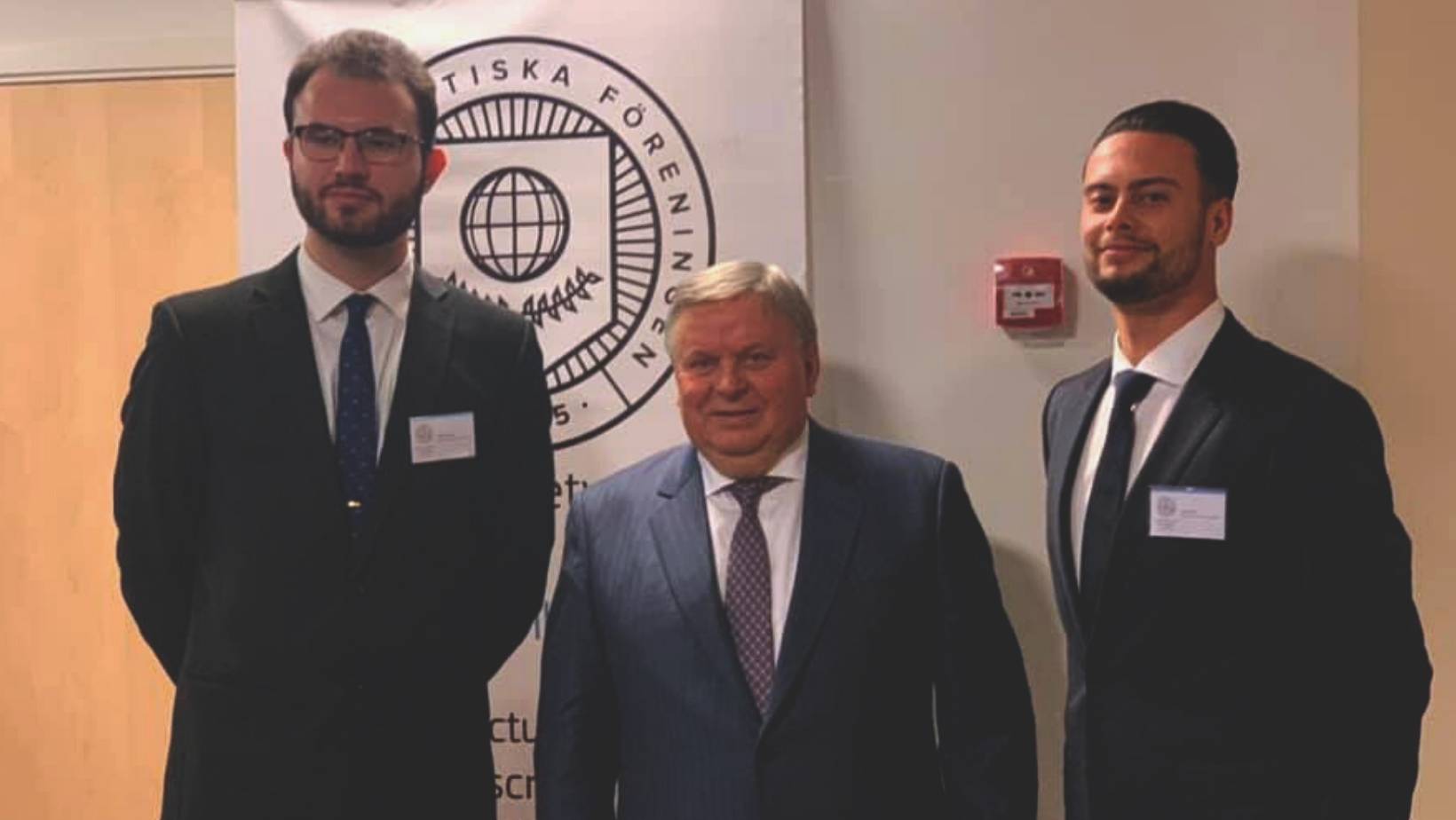 Invited by the Society of International Affairs of Gothenburg (UF Gothenburg) last November, the Russian Ambassador accepted to answer a few questions on current Russian interests in the international arena. For instance, he calls for cooperation between a European army and the Russian forces. He also wishes very good coordination in the fight against terrorism in the Middle-East, especially with the USA which did not consult Russia while moving in the region. He then criticizes the role of the USA as a global Hegemon, while claiming that China does not pretend to behave as such. His last comment is on the militarization of the Swedish Gotland Island, which is less than 300 km from the Russian coasts. For the Ambassador, Sweden or the EU have no reason to be sceptical or even afraid of Russia. On the contrary, Russia calls for more cooperation with its neighbours.

Utblick – The French president Emmanuel Macron has recently mentioned that the NATO alliance is experiencing brain death and that the EU should work towards an EU army. From a strategic point of view, is it more interesting for Russia that European countries build an efficient European army, or that they maintain an efficient NATO alliance?

Viktor Tatarintsev – Well, that is an issue internally up to NATO countries to decide upon. Nevertheless, as the French president pointed out, establishing a European army would be aimed not against Russia, but instead, would be made to act together with Russia.
So the general idea is positively approached by the Russian Federation. Our minister of foreign affairs, minister Lavrov commented on that. We are in favour of every proposal whatsoever, including this proposal, a very deep proposal by the French president to build up a European army together with the Russian forces.

Fight against terrorism and disagreements with the USA

Utblick – Donald Trump was proud of killing Abu Bakr al-Baghdadi a few weeks ago. He thanked the several countries, including Russia, for enabling this operation. However, Russia did not welcome this operation. What is the position of Russia about this operation?
Viktor Tatarintsev – Well, the question is not that we are not welcoming that operation. Naturally, we are supporting all the operations aimed at combating international terrorism, aimed at killing the leaders of international terrorism as Abu Bakr al-Baghdadi. But in part of the answer to your question, if we are welcoming the American forces to pass by through the Russian positions on their way towards the killing place of al-Baghdadi, that was not exactly the case. Our military representative officially commented on that saying that we haven’t had any slightest idea that Americans were asking us to go through the territory which we were controlling.
So that answer could be divided into two parts:
– We are in favour of destroying and combating international terrorism and their leaders for the first;
– For the second, well, it should be very good coordination between all the actors combating those terrorist attacks. In that case, American and Russian to act in common, to act actively and with full responsibility for their actions.

Comments on the World Hegemony: China or the USA?

Utblick – We often hear about a global rivalry between China and the USA for global hegemony. What is the ambition of Russia in world politics today
Viktor Tatarintsev – I don’t know exactly about the Chinese trying to become world hegemony. They have never declared that it’s their political goal. Therefore, we are not in a position to comment on something which has not been expressed by one side, by the Chinese. Well, give me please some example or any direct quotation that they are striving for becoming world hegemony, or to become a world leader. I’ve never seen such a declaration.
As far as President Trump is concerned, well he has made a lot of different declarations, also about the American highest responsibility or divine goal to become responsible for everything which has taken on our mother Earth. So they have tried to take upon themselves the role of World hegemony. We have never agreed to that. We have all the time taken our negative stand on that issue.

No need to be afraid of Russia, but “Swedes should think twice” in their moves!

Utblick – Sweden announced on the 1st of July the deployment of a new air defence system in the Baltic Sea on the Gotland Island. What does Russia think about this move?
Viktor Tatarintsev – Well that is the same question of the priorities which the Swedish side should take by itself: Where to build up their air or missile defence system in Gotland or in Gothenburg for example, or on the east coast, or on the west coast, the south coast or on the north. But we cannot naturally.
Since the attempts to build up their new missile defence system just on the eastern coast of Gotland… We are interpreting that tactic, that action, as being aimed at protecting Sweden from an alleged attack from the Russian side on the Swedish territory. We think that the Swedes should think twice before they take such steps because we don’t have any plans whatsoever to attack Swedes, and Swedish territory, Gotland in this specific case. In that concrete case, Swedes only pay their money for nothing so they would have used that money for better goals in that specific case I think.