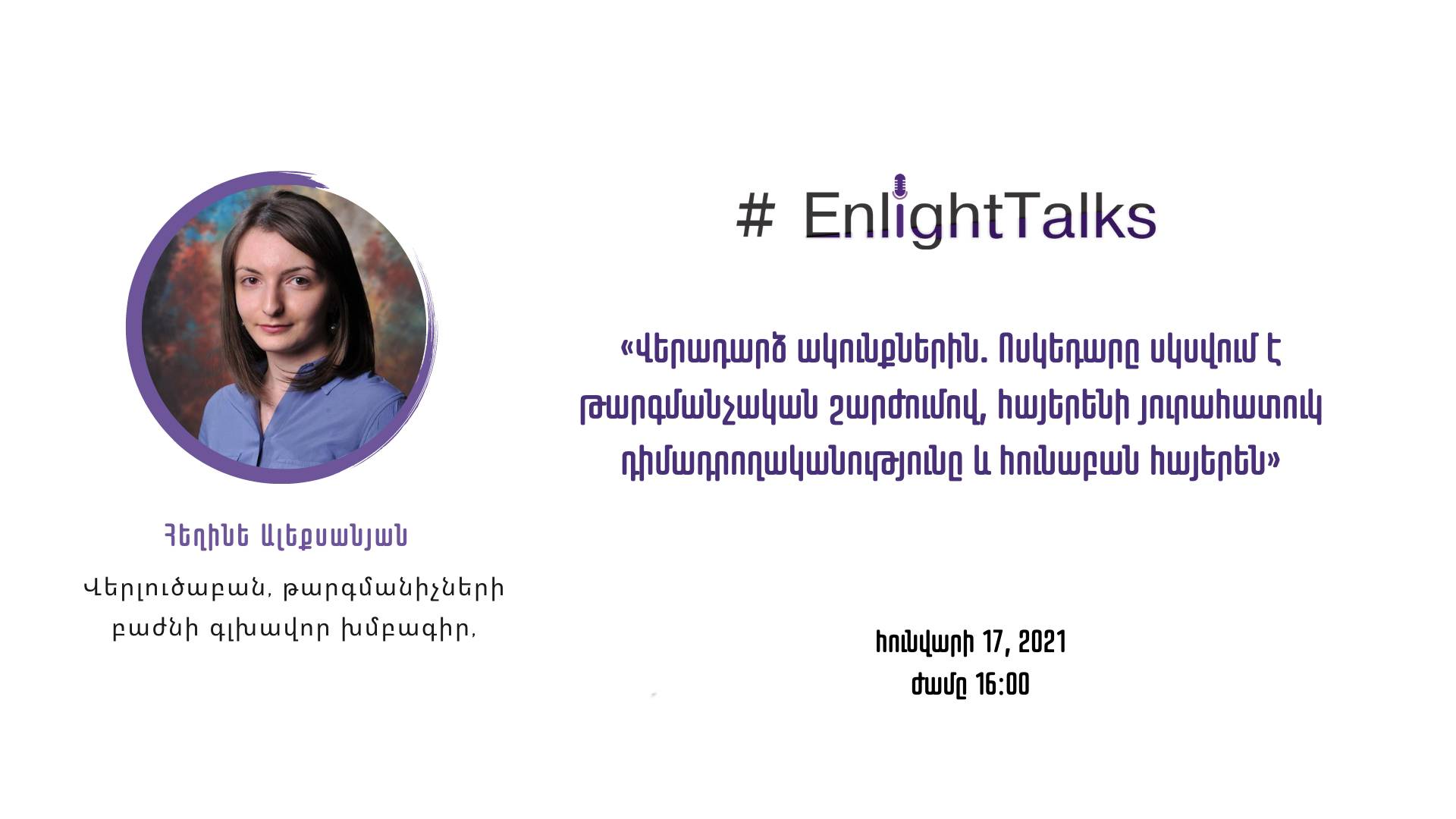 The Editor-in-Chief of the Translators’ department – Heghine Aleksanyan’s speech: “Back to the roots: the Golden Age begins with the translation movement, the unique resistance of the Armenian language and Greek Armenian,” took place on January 17, at 16:00.

At the beginning of the meeting, the speaker mentioned that she considers it reasonable to start the set of speeches by referring to the roots. Before moving on to the main topic, she discussed the translation of the word universal, presenting a version of root-for-root translation, that is: mieghen.

Then Heghine presented the main points of the agenda: historical overview, Armenian as a “winning language”, Golden Age, and Hunaban Armenian (Hellenistic School). Commenting on the formulation of the “winning language,” she noted that the entry of a foreign word or its equivalent translation into another language, in this case, the Armenian vocabulary, is a process that takes place in three stages: assimilation, allegation, and familiarization and only time helps to determine which option, after all, will enter the common vocabulary. The speaker made a historical reference with time distinction: the pre-Christian period (11th century BC-301) and the Christian period (after 301). Notably, she referred to the influence of the Greek language on the Armenian and the political factors conditioning it.

Heghine also presented the circumstances of the creation of the Hunaban Armenian in the Golden Age: the translation movement followed the invention of the letters, the young translators, who had traveled to Greek cities and received a Greek education, performed the translations according to Greek-specific patterns. As a result, the Hellenistic School was formed (5th-11th centuries), and those translation techniques and strategies were called Hunaban.

She also spoke about the influence of the Hunaban school on the vocabulary and grammar of the Armenian language (prepositions, Armenian equivalents of a number of words or their parallel versions, grammatical gender, dual number). She referred to Hrachya Acharian’s interpretation of the influence of the Hellenistic School and expressed her perspective.

The participants have also received an assignment: to use the online etymology dictionary, where one can find the exact meaning of each root and try to get Armenian equivalents of foreign words by calquing.

Attendees ended up asking their questions, generating further discussion. Get acquainted with the author’s analysis with the link.

Get acquainted with  Heghine Aleksanyan’s analytical articles by following this link.