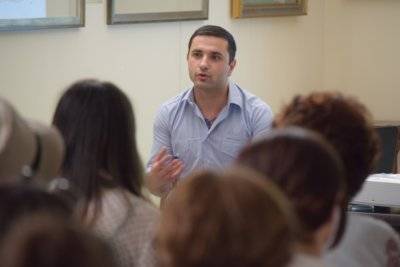 On July 22, in the Museum of Russian Arts a speech followed by a discussion on “Armenian Mythology and its Characteristics” conducted by ACoYA analyst Gor Madoyan took place by the initiative of “Tsirani” cultural hub. The speech aimed at representing the systematic characteristics of the Armenian paganism examining Armenian pagan pantheon in Hayasian, Urartian periods and during the reign of Arshakunis and Artashesyans.
The speaker drew parallels between the religious beliefs of modern Christianity and the old beliefs of paganism particularly underlining the ones that have been reserved or re-interpreted in Christianity. At the end of the meeting, the audience shared their opinion, highly appreciating the role of the lecture in the clarification of current understandings of the origin of the Armenians from the perspective of adopting Christianity. One of them, who was a doctor by his first specialty, and an art critic by the second one, mentioned that such meetings are a great opportunity in terms of providing the public with trustworthy and accurate knowledge especially in this period when misunderstandings are increasingly growing within religious perceptions. Another participant appreciated the role of the lecture as a second glance at the current approaches.