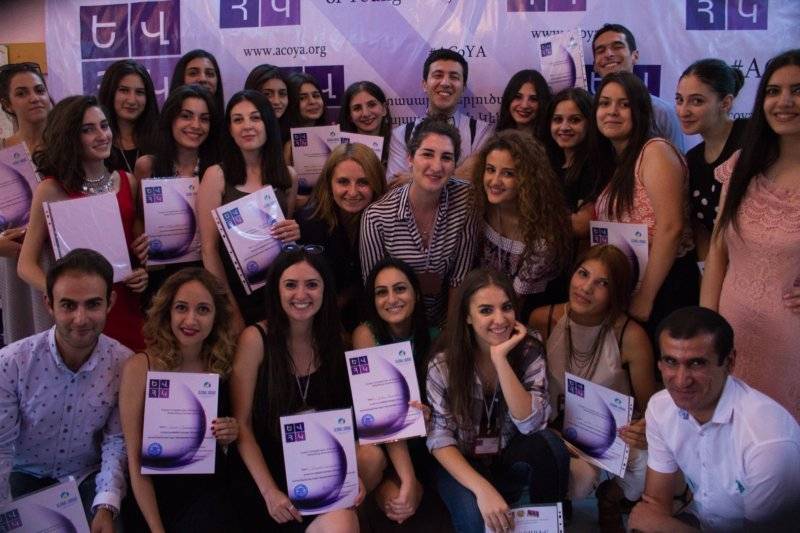 The project “School of Impart Competencies of Analytics” was held between August 22-28, which ACoYA implemented in cooperation with the Global UGRAD alumni.

The idea to create a school had emerged among the members of the “Armenian Centre of Young Analysts” still in the days of establishing the NGO, forasmuch as it proceeds from one of the primary objectives of the organization that is to develop skills of analytical and scientific writing among young people through informal education. The school was indeed the best way to accomplish that goal. The school of analysts was the first of its kind in Armenia. Though there exist various vocational schools in the country, there has never been held a school intending to develop the very analytical thinking (capabilities). There has never been held another school attempting to develop critical and analytical thinking of the young people regardless of their specialization.

The summer school participants were given the opportunity to get acquainted with the principles of analytical work, learned to knowledgeably use electronic resources and made new connections with the professionals of the field through lectures, interactive debates and models. The output of the project was the exceptional opportunity for the participants to publish their analyses on the ACoYA website.

The opening ceremony of the school was held on August 22. Areg Kochinyan, the president of ACoYA delivered his welcoming speech. There were organized various games to get acquainted with the participants and create a warmer atmosphere. The day ended with a lecture on form and content of various kinds of analyses. The lecturers were not only ACoYA members Areg Kochinyan, Anna Khachyan, Armine Mouradyan, Davit Petrosyan, but also specialists widely known in their fields, particularly Samvel Martirosyan who delivered a lecture on “IT Security”, Gayane Mkrtchyan on “Analysis and Journalism”, Lilit Minasyan on “Technical Components for Preparing a Scientific Article”, Styopa Safaryan on “RA Domestic Situation Analysis”. Edgar Elbakyan as well presented the NKR issue in the context of the April war and further developments. Based on that example, he also introduced practical tools for analyzing large topics. The closing ceremony took place on the last day of the school during which the participants received certificates and prizes. At the end of the day everyone enjoyed the joint dinner-party. In the course of the closing ceremony the participants expressed their gratitude, many of them expressed their willingness and wish to join the organization.

When asked what impressed them the most, participants Lusine Hovhannisyan and Tatevik Gevorgyan noted the devotion and responsibility of ACoYA members to their work, as well as the friendly treatment of the staff towards them and the warm atmosphere they were able to create.

As for the expectations of the organization from this initiative, let us say that they were completely justified. First, more than 100 applicants had applied for 20 available vacancies. Second, an atmosphere had been created in which the young people made friends with one another and the environment was immediate regardless of the fact that people from different fields were present, among them political scientists, international relations specialists, economists, linguists, etc. And third, specialists who are leaders and high knowledge bearers in their fields were teaching in the school and were able to be maximally useful to the young people.

It is worth mentioning that the school participation was free of charge, and the transportation expenses of the young people coming from regions were also covered.

This school was the beginning, but definitely not the end…