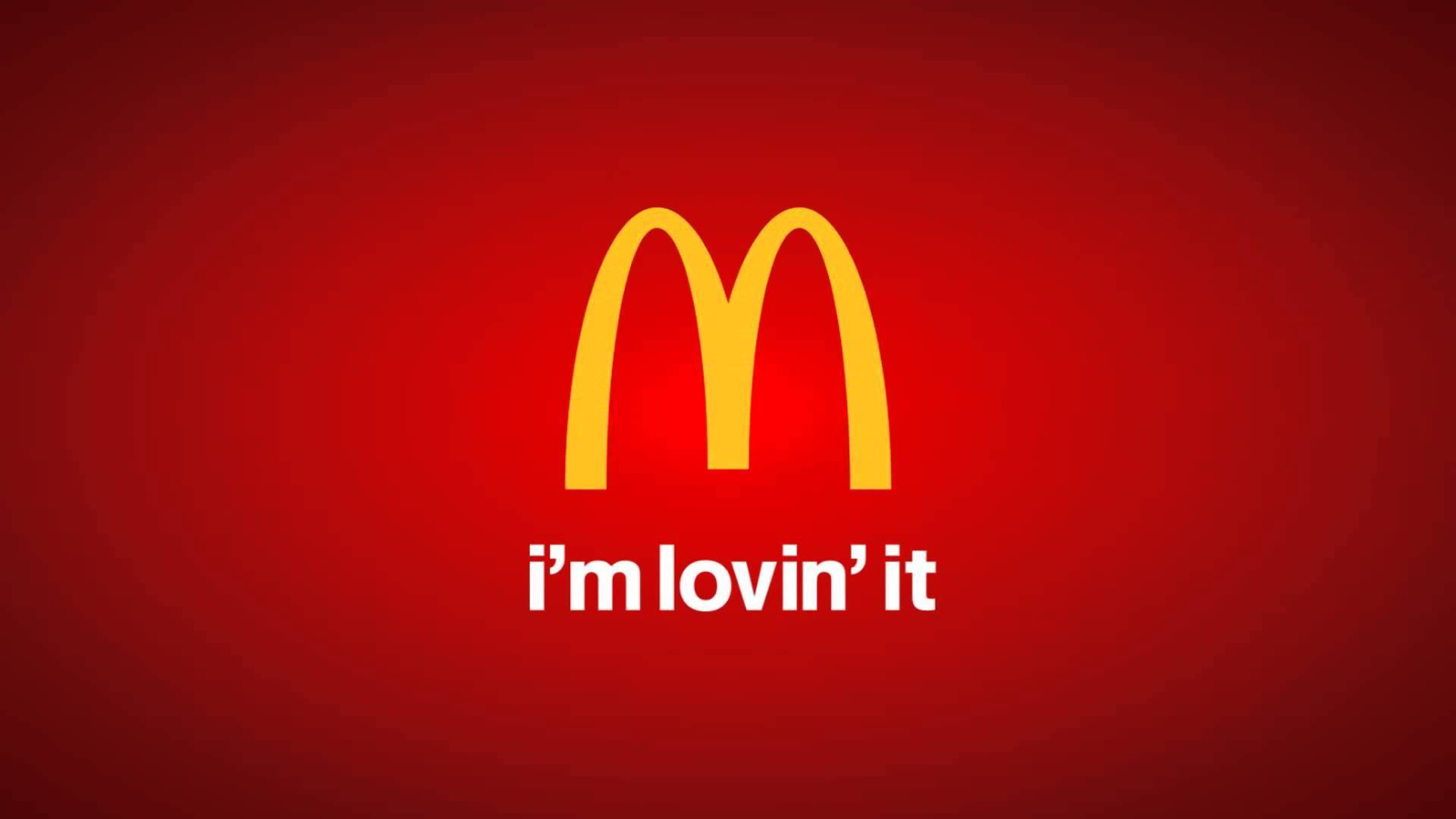 Today you can hardly find anyone who is not familiar with McDonald’s. This giant of fast food, which was founded by brothers Dick and Mac McDonald’s in 1940s and had so much success thanks to Ray Kroc functions in 119 countries and in the number of its brunches yields only to “Subway” serving more than 70 million people daily. The population of Armenia is not included in this process, because fast food chain McDonald’s does not work in our country yet. A question ‘why’ arises. Let us understand.

The news about McDonald’s opening in Armenia has been around for a long time. In reality, a few know that McDonald’s registered its label in Armenia in 1999, but has never used it. It’s obvious, that McDonald’s did this because they didn’t want third parties to use their name, motto or logo. In October 2011, the rumors about the opening of McDonald’s in Armenia revived, when a news website published an article, according to which “Tashir Group” was going to bring “McDonald’s” to Armenia with a franchise agreement. The location of the chief “McDonald’s” was going to be Dalma Garden Mall. However, as it was found out later, these conversations remained mere rumors. Last year on February, rumors concerning the opening of “McDonald’s” in Armenia reopened. The reason was the meeting of the managing staff of “McDonald’s” which was to be held in Orlando, USA in April, where the question of opening “McDonald’s” in Armenia would most likely be in the agenda. But unfortunately (or luckily) for Armenian people, after the meeting it was noted that McDonald’s is not going to bring its trademark to Armenia.

Is it easy to open “McDonald’s”?

In reality the opening of “McDonald’s” is not an easy process (if it’s not being opened by  the company itself). In order to operate on the behalf of this fast food giant one needs to acquire the company’s franchising package for which one needs:

Before providing franchising, McDonald’s throughly examines its franchisee’s activities (especially their experience, the efficiency of the presented business plan, the presence of financial means for initial investments, management literacy,  the level of competence in the fast food field, etc.), which is natural, because they are going to be “McDonald’s” official representative in that country and influence the future development of the company. It is natural, that the conditions and the amount of expenditures are hindering the appearance of “McDonald’s” in Armenia, because people who are going to be franchisees, should as well have their own income and make sure the investments are justified. Every investment to some extent contains a risk, and as the present situation shows, Armenian businessmen do not want to take that risk[ii]. The experience shows that despite the big investments, the period of investment return is one year. In case of Armenia, the situation can be a little different, connected with the differences of Armenian market, which will be discussed below.

“McDonald’s” examines not only the franchisee’s activities, but also examines the franchisee’s country, its rules, its economic, social and demographic indexes and so on. Armenia is not very attractive for “McDonald’s”, as the permanent amount of Armenia’s population is small and tends to decrease; according to the data provided by NSS (National Statistical service) in 2013 the number of the population in Armenia was 3mill 17.1k, in 2015 it was 2mill 998.6k. This shows the small capacity of the market, while “McDonald’s” has a fully developed strategy, according to which when it enters the market of a country, it doesn’t stick to one branch and plans to become larger during several years. Some time ago, there were rumors that it was possible to open 8 branches of “McDonald’s” in Armenia with around 1000 employees. But more precise reckoning shows that in the best case it is possible to open 5 branches, most of which are going to be located in Yerevan. Besides, the index of purchasing power in Armenia is not very high[iii] and it keeps descending, the main reason of which is the large cutting of transfers from abroad. It is obvious, that all this is not an attractive condition for “McDonald’s”. Except for this, “McDonald’s” has 4 main principles[iv], from which the principle of affordable prices will not work out in Armenia. “McDonald’s” pays special attention to the making of fries. There are certain standards for not only making potatoes but also for growing them. This is why “McDonald’s” delivers potatoes already chopped and frozen according to the company’s standards to most franchisees, thus connecting the production to consumption. It’s not like Armenia is not attractive for “McDonald’s” at all. In reality exist many factors and indexes, which make Armenia captivating for investors, in this case for “McDonald’s”. An index like this is the index of security; a famous company “Numbeo” has composed a list of safe countries Armenia ranks the 25th place among 117 countries with the security coefficient of 68.89%. Besides this in 2016 famous agency “Fitch Ratings” gave B+ rating to Armenia, which makes Yerevan quite attractive for foreign investors. It is worth mentioning that the rating given by an agency like “Fitch Ratings” is quite weighty and reputable, which is also an important guide for international investment companies and foreign businessmen in making investments.

The reaction of Armenian society

“McDonald’s” will not appear in Armenia, if there is no demand of its product in Armenia. In order to find out whether Armenian consumer is interested in opening “McDonald’s” in Armenia, we created a poll in one of the social networking sites, where 174 people participated, the results of which are below: 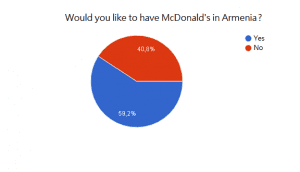 As it can be seen, the majority of the asked agree with the opening of “McDonald’s”.  The majority of those agreed, justify their response with several reasons like the food of “McDonald’s” is tasty, there will be a new spirit in Armenian market, the creation of a competitive field, it’s fashionable and so on. The main argumentation of those disagreed was that the food, “McDonald’s” serves, is of bad quality and harmful for health. Besides, there are many fast food restaurants of far better quality in Armenia.

Fast food restaurants have been proven to serve food far from being healthy, however it is possible to choose the one in this field with relatively good quality. Today international food companies like “KFC”, “Pizza Hut” have their branches in Armenia. Recently famous “Burger King” also opened in Armenia, which already has its good position in the market. The presence of such opponents can be an additional motivation for “McDonald’s”, as the latter will want to have a share in the market in order not to lag behind its opponents. Besides, this will be a push to the development of agriculture, as in Armenian “McDonald’s” Armenian products will be used. The presence of “McDonald’s” can also boost the image of Armenia and be a favorable factor for foreign investors, so that they can make investments in our country, new workplaces will be created as well. Anyway, it is impossible not to state that “McDonald’s” will bring new quality to the Armenian fast food market, thus giving a new spirit to the competition in this field and to the quality of service.

[i] McDonald’s does not provide its franchisees with borrowable means.

[ii] It is worth mentioning that some time ago famous Armenian businessman Khachatur Suqiasyan intended to become the franchisee of McDonald’s and bring it to Armenia.

[iii] In the last 2 years and first 5 months of a year the purchasing power of Armenia’s population has decreased in 38billion188million dram. In other words in 2014 from January to May people in Armenia spent 38billion drams more than in 2016.

[iv] The main principles of McDonald’s are quality, the level of the service, cleanliness and affordable prices.