Charisma as a guarantee of political success

The word charisma stems from Greek and means ”divine grace” [i]. It is commonly used in the phrase ”charismatic leadership”.

The strength of a charismatic leader lies in his rarely occurring grace. There are a number of circumstances that define a political leader’s role in society, such as his image, the mentality of a country’s population, its ethno-religious composition, constitutional framework etc. In many cases the success of a political leader is not only determined by an adequate performance of his duties, but also by his intuitive, emotional capacities, which are demonstrated by self-confidence, and the ability to solve problems. Generally, leaders are characterized by a personal style, which is defined by physical features, incidents from the past, voice intonation, manners, one’s roots and even specificities such as a unique ring or clothing. Although all these elements do not always provide sufficient information about the functional and moral capabilities of the individual, they often have a magical impact on his role as a leader.

The personification of politics in the Republic of Turkey

One of the typical features in the development of oriental countries is the presence of a charismatic leader. This particularly applies to the case of the Republic of Turkey. With the establishment of the Republic in 1923, the Kemalist military-bureaucratic elite in Turkey adopted the Western reform model in order to modernize the country. However, in the wake of these expansive reforms, Turkish society lost its traditional means for reaching solidarity and peace which originated from the so-called «power of tradition». As a result, for the purpose of uniting society, the Kemalist political elite consciously used alternative mechanisms which were similar to the notion of the “power of tradition”. In this respect, the charismatic nature of leadership, which sometimes amounted to a personality cult of a political leader was of particular importance. Turkey’s ruling elite has applied this mechanism throughout the history of the Republic up until now. The phenomenon of charismatic leadership is often linked to an individual politician’s personal characteristics and ideas, while comparison of the Turkish case with other oriental political systems illustrates that charismatic leadership has always been present in the Turkish political system thus being a key component of its sociocultural dynamics. In the first half of the 20th century, the concept of a personality cult was a key factor in the development of totalitarian and authoritarian regimes in Europe. Under influence of the occurences in Europe as well as internal political developments, the founder of the Turkish Republic, Kemal Ataturk soon became a typical oriental authoritarian leader. As a result, a cult of his personality emerged, which continues to manifest itself nowadays.

In December 2013, when Turkish Prime Minister Recep Tayyip Erdogan made a speech in Istanbul, some of his supporters wore T-shirts with the text “Man, we follow your footsteps”. This text reminds of the famous kemalistic slogan “Father, we follow your footsteps”. This and many other examples illustrate that an attempt is made in modern Turkey to create a cult over another personality, i.e. Erdogan. Films are shot about him and books are written, works of art are created in order to praise him. Almost everywhere one can find his wallpapers, flags, statues and, in addition, several institutions are named after him[v].

The ruling elite led by Erdogan brought new ideas which are based on islamic nationalism combined with the reappraisal of Ottoman heritage[vi].

Ataturk image in Turkey as a charismatic leader remains unsurpassed, though president Erdogan strives to create a cult around his person as well. He has the necessary religious and «streetwise» characteristics inherent to a leader [vii].

To understand the formation of Erdogan’s political orientation, his ideas and political figure, it is necessary to start with his childhood. Erdogan was born in 1954 in the Kasımpaşa district of Istanbul, which is known in Istanbul as an active, semi-criminal district. Having roots in Kasımpaşa is associated with the image of a brave, snappy ”street boy” or “good boy” [viii]. When he was a child, he sold soft drinks and cookies in dangerous parts of the city. In his speeches, Erdogan has repeatedly mentioned that he is from Kasımpaşa. Especially at the opening of the Beyoglu-Kasımpaşa tunnel he said in his speech he is lucky his fate stemmed from Kasımpaşa [ix].Consequently, his childhood environment was of direct influence on the establishment of his figure. According to Alin Ozanyan, Erdogan’s success partly lies behind the circumstance that by leaving the «steert» Erdogan did not forget the problems of its people and their mentality [x]. In addition, it is important to pay attention to Erdogan’s education. In 1973, he graduated from Anadolu Imam Hatip School, the only religious school of the time in Istanbul, whose alumni were perceived as Islamists in the 70s and could face some difficulties [xi]. Erdogan originally wanted to become a theologian, but he later decided to engage in politics. His political party “Justice and Development (hereafter JDP)” is by its nature ”the advocate and flagman of political islam”. As Erdogan understands the importance of education in the establishment of an individual, he encourages the establishment of religious schools. Between 2017-2018, for instance, the number of Imam Hatip schools reached the amount of 1453 [xii]. Erdogan has never hidden his islamic views and aspirations to reestablish the Ottoman Empire. Moreover, it can be argued that his islamic point of view is interconnected with the desire of restoring the Ottoman Empire. In this regard, Palestinian president Mahmud Abas’s visit in Ankara, in 2015, was subject of great discussions [xiii]. Erdogan received him at his new residence in Ankara, where he had moved in October 2014 [xiv]. The new residence meant to symbolize the start of “New Turkey” [xv]. Erdogan met Abbas in the presence of 16 historical combatants in military uniforms armed with swords. The aforementioned was subject to mockery in social media. For instance, Turkish journalist Kadri Gyursel qualified it as an “Ottoman circus in palace”. He also mentioned with sarcasm that ”pasha” Erdogan met governor Abbas from Ramallah as if the latter was representing the Palestinian state of the Ottoman empire [xvi]. The 16 soldiers symbolized the 16 empires in Turkish history [xvii]. These 16 empires also symbolize the 16 stars of the official seal of the Turkish presidency. 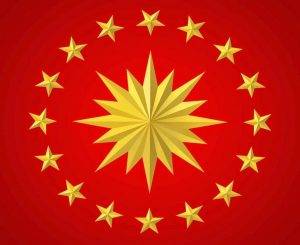 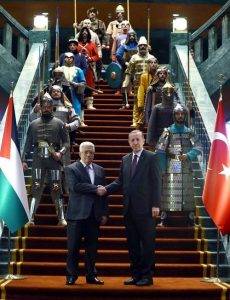 Erdogan often refers to the prerepublican period of Turkey and, as a result is often subject of accusations which point to the weakening of the country’s secularist and modern structure.

In 2011, Erdogan responded strongly to the draft resolution of condemning the denial of the Armenian Genocide by France. By addressing the serving French President Sarkozy, Erdogan read a historic letter, written in 1526 by Sultan Suleyman the Magnificent to Francis I, the King of France. The letter concerned the response to Francis I’s request for help, who was being held captive at that time. After mentioning all the invaded countries the sultan ruled himself in the beginning of the letter, Suleyman addresses to the King of France telling him that the latter would learn from the ambassador what his help would entail. In his speech Erdogan especially wanted to emphasize the contrast between Sultan Suleyman as the ruler of numerous territories and the captivated King of France who was in need of help [xviii]. In another speech, Erdogan spoke of being the grandchildren of Sultan Suleyman [xix].

During his speech on 11 February 2018 on the 100th anniversary of the death of Sultan Abdulhamid II, Erdogan noted [xx] that some people were trying to cut them off their roots and consider the year 1923 [xxi] as the creation of their country. He put forward that the Republic of Turkey is the successor of the Ottoman Empire and that from now on the Ottoman and the Republican eras should not be regarderd separately. Erdogan called Abdul Hamid as “the last universal emperor of the world”. By means of this speech, Erdogan tried to eliminate the abyss that Kemalists created between the Turkey’s Republican and Ottoman eras.

The effective economic policy was of great importance for Erdogan’s image as a charismatic leader. Between 2003-2015, the country’s average annual GDP growth was estimated to be 4.6%, and the GDP per capita in 2015 was 20,438$: This was the result of an effective economic policy, as Turkey not only was able to withstand the global crisis but also managed to grow. Along with the country’s foreign policy, this helped Turkey to become a leading country in the region. This progress is mostly ascribed to Erdogan and JDP.

It is not difficult to see that Erdogan is receiving the warmth and support of the people during his public speeches. The tone of his voice, his confidence, strength, and faith are attractive and influential. Erdogan’s speeches are emotional, flavoured with proverbs and Ottoman sayings. The president’s love for poems is not a secret, either. He has chosen to reach people’s hearts through influential and exciting poems. This is one of the key elements of Erdogan’s charismatic image. ”The Leader” addresses people primarily with prayer-poems [xxiii].

The love towards poetry and their mainly religious content, however, have caused some difficulties for Erdogan. While serving as a mayor of Istanbul, in his speech in Shirit (1997) Erdogan recited “Soldier’s Prayer” written by Ziya Gökalp during the Balkan Wars, ending with a quatrain that was highly Islamist. The meaning of the quatrain was approximately as follows: “Mosques will be our swords, Muslims will be our soldiers, and we will achieve our goals”. On charges of “publicly inciting hatred and enmity on the basis of religious and racial discrimination”, under Article 312/2 of Turkish  Penal Code, Erdogan was sentenced to 10 months in prison. [xxvi].

The fact that president Erdogan enjoys great support in the country became also clear from the failure of the revolution attempt in July 2016. One of the main reasons for the failure of the coup was the rapid mobilization of Erdogan`s followers [xxv]. Erdogan was able to make full use of the potential of his loyal forces, calling on citizens to capture public spaces from the first hours of the calamities and hereby preventing the military to establish their authority in the country [xxvi].For the purpose of mobilizing people the government succesfully chose the slogan “stand up for democracy”

Charismatic leadership and personality cult are rooted phenomenons in Turkey. This is also the result of long lasting  imperial systems which Turkish people have lived through. And after Ataturk, the Turks have  continuingly been looking for a “father” for themselves.

[xv]“Abbas welcomed at Turkish presidential palace by Erdogan and 16 warriors”, The Guardian: 12.01.2015