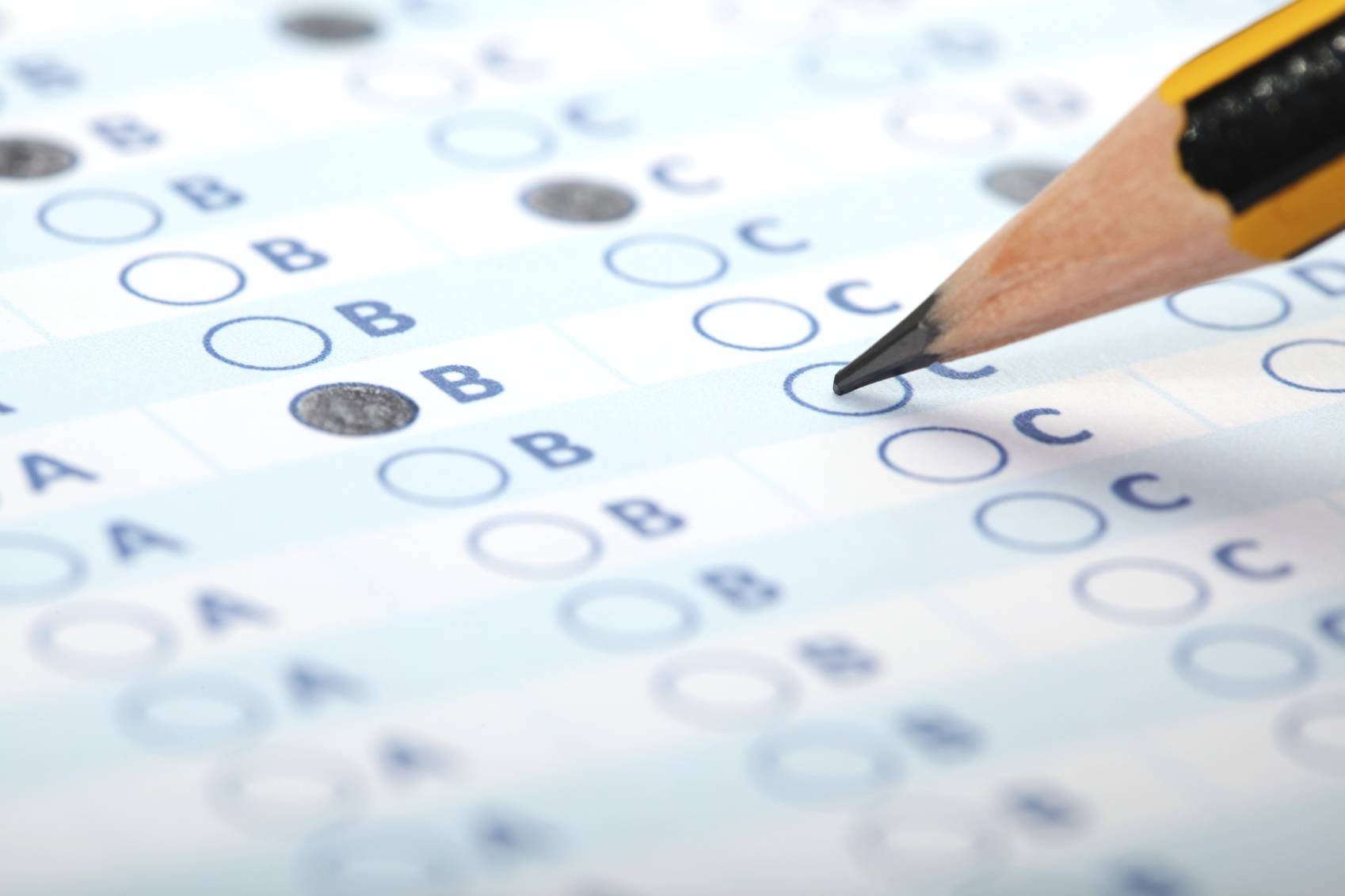 The RA Minister of Education and Science Araik Harutyunyanmade an announcementon March 15, where he spoke about not allowing the re-registration of the 3rd paid exam in state HEIs.He spoke about the fact that students are given 4 possibilities to recount the exam. The student, not being able  to get a passing grade from one of the three opportunities given to him, ask for one more opportunity from the Ministry of Education and Science, and the ministry, in its turn, is able not to give that opportunity.The Minister mentioned that applications were sent to the Ministry of Education and Science requesting to give the studentsthe 4th opportunity to re-assign. As a result, Arayik Harutyunyan considered the permition given by the Minister of Education and Science to “an encouragement not to learn”, adding that the previously established practice would no longer continue, and he didn’t give any concrete solution concerning to the existing applicationsFollowing this announcement, a number of students, who had a similar problem on Monday, 17.03.2019 applied to YSU Rector asking them to re-take the test but receive a negative response. On March 24,an announcement was  released on Facebook social network with the following content: 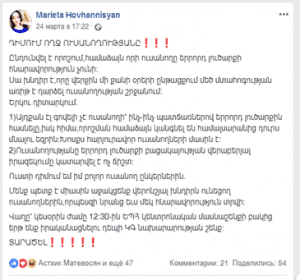 The march following this announcement started on March 25, at 12:30 AM, to the Ministry ofEducation and Science. 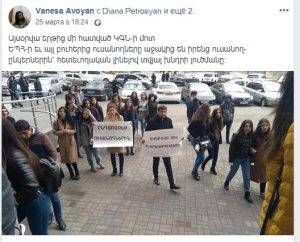 According to the students, they met Deputy Minister GrishaTamrazyan, above, and informed that YSU rector should submit another application to the Ministry. It is worth mentioning that YSU Rector for the first time wrote and refused. Aram Simonyan, in response to the request of the students to apply for another application to the Ministry of Education, refused, pointing out that there are objective and subjective reasons. *

On March 28, another statement spread on Facebook social networkwhich reported about carrying out another march on March 29 to the Ministry of Education and Science. 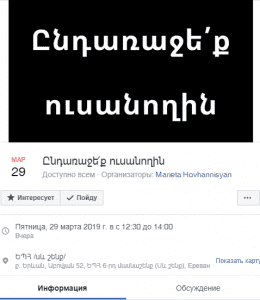 In this application, 273 students of YSU Faculty of Oriental Studies are asking “… Take into account the situation and make a decision according to which the exemption will be given one more and last opportunity to take at least one of their exams to re-assign the students who are already on the verge of eviction…” 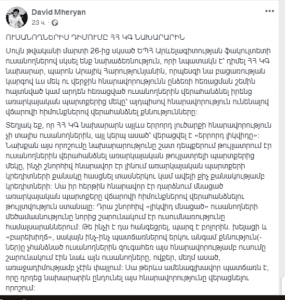 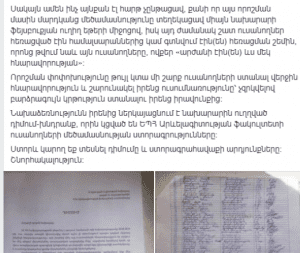 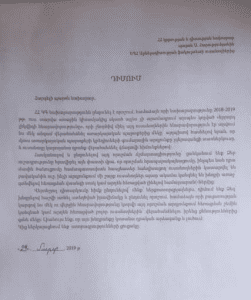 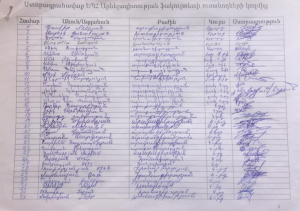 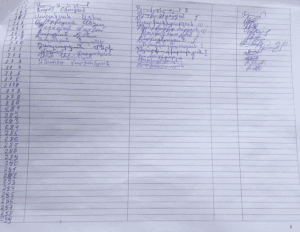 Thus, based on the procedure of the majority of RA state HEIs related to the exams, we will discuss the decision of the 67 § 31th decision of the Yerevan State University dated 18.04.16.

Thus, the Minister of Education and Science has a discretionary power either to allow the exam to pass or not.According to Article 6 of the RA Law on “Principles of Administration and Administrative Proceedings”, the following is defined:

The discretionary power is the right reserved by the law to the administrative body to select one of several possible legitimate solutions.

While realizing the discretionary powers, the administrative body must be guided by the necessity of the protection of the human and citizen’s rights and freedoms fixed by the Constitution of the Republic of Armenia, their equality of rights, the prohibition of sympathy and arbitrariness of administering, as well as other legally-prescribed objectives.

Taking into account the statement of the Minister of Education and Science Arayik Harutyunyan that the practice of permits by the Ministry of Education and Science will no longer continue, we need to refer to the existing and existing procedures, not yet sent to the examinations for the period from April 25 to May 1, 2019.According to Article 7 (2) of the same law, “… if the administrative body has exercised a discretionary power of attorney, then in the same cases it is obliged to carry out that discretionary power in the same form …”.

In this case, students failing or failing for various reasons will lose that opportunity previously.As a result, the prohibition of arbitrariness was violated.Although the phenomenon itself is perceptive from the point of view of the fact that the student is given 3 possibilities to pass the subject and it is sufficient for the subject matter to be properly prepared, but the case is controversial in the legal sense.We believe that the practice of non-provision of this opportunity by the Ministry of Education can only begin when students are properly informed of the possibility of depriving them of the third opportunity and only the appropriate decision is forbidden to practice such practice.Otherwise, the decision will have a detrimental effect on students. According to Article 73(1) of the Constitution of the Republic of Armenia, laws and other legal acts deteriorating the legal status of a person have no retroactive force.As mentioned above, this situation would be deteriorating because of the fact that they did not know and could not even know about such changes.

Thus, even though we are dealing with the execution of discretionary power we think that in case of such a practice after the students’ knowledge, some criteria should be worked out, in particular taking into account the student’s previous assessments.

In the statement of RA Minister of Education and Science Arayik Harutyunyan there was no actual circle of students in which the statement was made. Article 79 of the Constitution of the Republic of Armenia defines the principle of certainty, that is: while restricting the fundamental rights and freedoms, the laws should define the grounds and extent of these restrictions, should be of a sufficient extent that bearers and recipients of these rights and freedoms are able to demonstrate appropriate conduct.From the logic of the above-mentioned, it becomes clear that maintaining the principle of certainty is also relevant to the decisions, stances, and statements made by state and non-state institutions.The statement in question was entirely absent.In addition, the Minister of Education and Science mentioned in his statement, “… we are very firm that no such encouragement can be made from now on and we will now examine the applications that are available.Perhaps this will be the last chance, but I am not sure because I have to study a range of settings … “As a result, it becomes clear that the Minister of Education and Science has not yet studied the basic adjustments that were necessary and applicable in such a situation, creating uncertainty for a wide range of students.

Thus, in view of the above, we can state that the statement, which is being made, should not violate a number of principles enshrined in the RA Constitution and cause legal uncertainty within the society.

[ii] The Minister of Education and Science of the Republic of Armenia issued 1576 order issued on December 17, 2018.