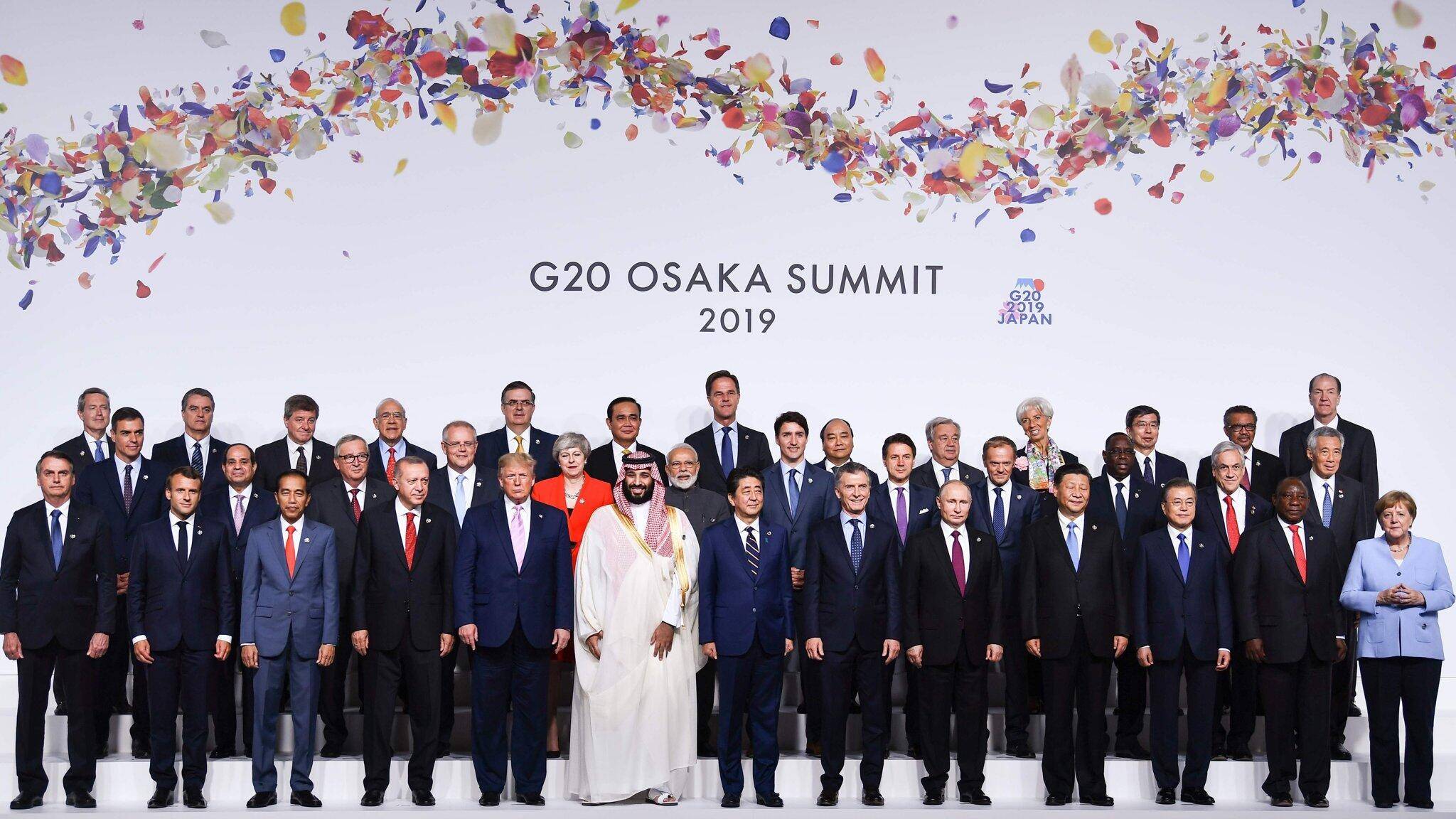 G20 is the format of the annual meeting of leaders of the countries with the world’s largest and fastest-growing economies. Those two dozen countries together weigh 80% of the world’s economy or 2/3 of the population. This time, the summit featured a number of controversial stances, from climate change and the nuclear deal with Iran to global trade[i].

This year, during G20 summit, which took place on June 28-29 in the Japanese city of Osaka, the focus of the raised issues, especially Iranian, trade and climate issues, was the European Union[ii].

Let us briefly summarize the most memorable meetings and events.

The US President Donald Trump, in a bilateral meeting with RU President Vladimir Putin, in response to the journalist’s question, jokingly threatened to Putin’s direction and asked: “Do not interfere in the [American-ed.] elections, please!” 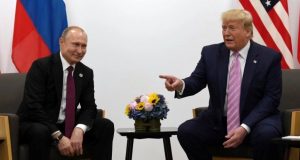 This was the first meeting between the two Presidents since the publication of an investigation report by Robert Muller about possible intervention by the Russian side in the US presidential election, which took place in 2016. Accordingly, the latter’s report does not reveal any criminal connection between the Tramp pre-election team and the Russian side while the US secret services believe that the Russian state system directed cyber-attacks and false rumors in favor of Trump’s victory[iii]. Nevertheless, in an interview with the Financial Times, Putin expressed an opinion that liberalism is outdated nowadays and welcomed the rise of populism in Europe. He also called Trump” gifted man”, who knows how to treat his votes. In his turn, Trump praised Putin, noting that he is honored to meet President Putin and added that they “have a very good relationship.” According to RU President’s Spokesperson Dmitry Peskov, an official invitation will be sent to Trump to participate in Moscow’s 75th anniversary of the Great Patriotic War on May 9.

Russian President Vladimir Putin and British Prime Minister Theresa May have had a private conversation on a number of thorny issues, and before the discussion, photographers seized the pair’s look, especially Theresa May’s cold gaze. Among the complicated issues was still the former officer Sergei Skripal’s poisoning by alleged Russian special services. The Official Kremlin, however, still denies its any connection with the incident. 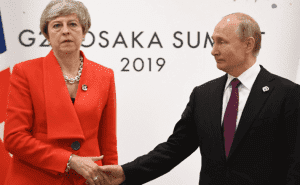 The trilateral meeting between the leaders of Russia, India and China V. Putin, NarendraModi and Xi Jinping is of great importance, during which the parties discussed the ways of strengthening the mutual ties. Together with foreign ministers and senior military officials at the discussions, they discussed the coordination issues of the struggle actions against terrorism, drug trafficking and other challenges.

Putin underlined that Russia, China and India are firmly opposed to the trade protection (practice, under which the government heavily taxes non-local enterprises with a view to protecting national enterprises from external competition)[iv], unilateral actions and illegal sanctions[v].

At the beginning of June of this year, India set high taxes on 28 US-branded products, such as apple, almond and walnut.

This was the answer by Tramp given to India to the step of abolishing the GSP criteria, moreover, India was the largest beneficiary of that mechanism, giving the country the right to sell up to $ 5.6 billion annually without tax[vi].

French President Emmanuel Macron noted that he wanted to see underlined wordings in any final statement of the summit to support climate change. However, the issue remains controversial, as the United States continues to be out of the climate treaty, signed in Paris in 2015. Moreover, Macron also warned that France would not sign the G20 statement if it did not contain a clear provision on the Paris Climate Agreement[vii].

The talks between the US and China presidents were the most awaited for this G20, as the two countries would try to resolve a trade dispute between them in any way.

Last month’s planned talks were canceled when Trump accused China of not fulfilling its promise and raised tax rates for imports of Chinese goods at $ 200 billion. China, in turn, responded with its own tariff campaigns.

Last time they met at the G20 summit in Buenos Aires last year and agreed on a 90-day trade truce during a working dinner.

The US and Chinese trade delegations met in Osaka before Tramp-Jinping meeting, so Tramp’s advisers mentioned that the talks would take place without preconditions, and commercial ceasefire or use of new tariffs are quite possible results.

EU leaders, in their turn, said they were worried that the China-US bilateral deal could be acquired at the expense of Europe, for example, if Beijing agreed to buy more Boeing than Airbus planes or if Jinping preferred to protect only the intellectual property rights of the American companies. [viii]

“There is not a short war,” warned Makron. “We know when it starts but never know when it ends.” Great Britain, France and Germany are completing the INSTEX complicated exchange systemto maintain trade with Iran and avoid US sanctions, as part of efforts to maintain a nuclear deal[ix].

The situation in Iran and Syria was one of the main topics discussed during the meetings of Putin and Theresa May, as well as Putin and Makron, Trump and Merkel.

Trump also mentioned that US companies would continue to sell equipment partsto the Chinese tech giant Huawei, which was considered a considerable concession by economists.

After the meeting at the G20 summitin Osaka, he confirmed that the US should not add $ 300 billion for tariffs for the imports of goods from China, adding that negotiations with Beijing would continue.

At a final press conference, the US President reaffirmed that American technology companies could trade again with Chinese Huawei, which, in fact, actually lifted the ban imposed last month by the US Trade Department.

It should be noted that this trade war has hit many investment projects, business credibility and export to the world’s second largest economy. However, declaring a ceasefire does not mean that the trade war is over. Commodity taxes worth hundreds of dollars are still in effect. Moreover, both sides should still come to an agreement on many issues.

In fact, Washington wants Beijing to change the development way of its economy in the past four decades, stop subsidies from state-subsidized companies, open the domestic market, and most importantly, take into account that it will be responsible if it fails to fulfill any of its obligations. “We strive to have a free, fair, non-discriminatory, transparent, predictable and stable trading and investment environment and keep our markets open,” said in the joint statement released at the end of the G20 summit. The Leaders of the G20 countries reaffirmed the use of “all of the policymaking tools” in order to have a stable, balanced and inclusive growth, but without a promise to fight against defenses. “International trade and investments are important driving forces for growth, productivity, innovation, job creation and development,” said the G20 leaders’ joint statement[x].

It is not surprising that the United States was the only country among G20 member states, that adopted a different position to the Paris climate deal.

19 other members, including Turkey and the European Union, have pledged to exert efforts to fully implement the 2015 Paris climate change agreement. The United States refused from the deal when Trump came to power.

At the G20 Summit, Washington reaffirmed its position to stay out of the deal.

When Trump was asked a question about Climate Change, he answered: “We have the best indicators, that have ever been recorded, and I’m not going to create such [environmental, authoritative] standards for our companies resulting in the loss of 20-25% of our production capacity,” and added. “We have such fresh air, that we have never had before.”[xi]

The next summit is planned to be held in Saudi Arabia in November 2020.

By the way, the Crown Prince Mohammad bin Salman continued to receive questions from Turkish and other leaders in Osaka on the brutal assassination of Saudis journalist Jamal Khashoggi in Istanbul last year and the issue will probably continue to remain on the agenda. 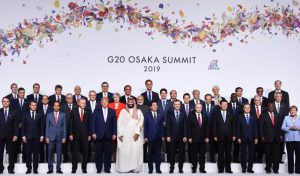