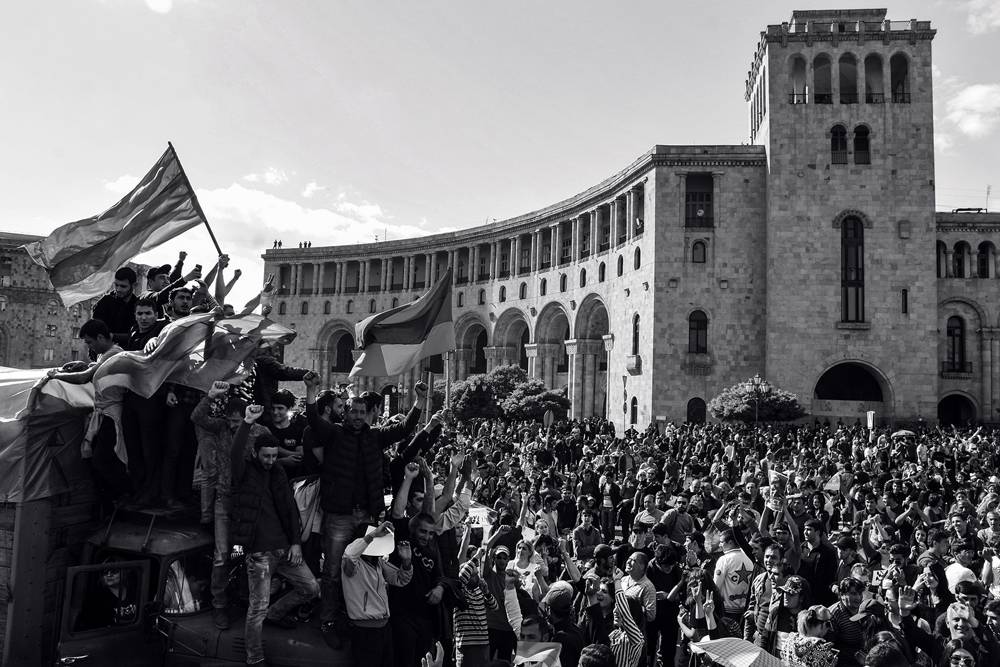 Protesters- during the whole revolutionary process, they behaved unpredictably restrained, responsible and, most of all, organized. The decentralized demonstrations and protests were taking place throughout the country in an unprecedented harmonic way. In every hour, every minute, new cities and villages were joining the pan-national movement, and it’s worth to mention that everywhere it was happening absolutely calmly and without violence, not diverting from the revolution-adopted philosophy. Even on the day of SerzhSargsyan’s resignation, when about half a million of people gathered in the center of the capital city, noriots took place, no window was broken, no car was damaged: all of this is not comparable even to the riots of the Western developed democracies that take place during much smaller rallies.

The police- despite the infractions as a result of overstrung atmosphere on certain days, they displayed an unconventionally restrained, professional, and, from time to time, even conceding attitude. After SerzhSargsyan’s resignation, the police withdrew their main forces from the city and didn’t respond to the social-political developments.

The army- unlike March 1, it was not used against the calm population but, in my deep conviction, not thanks to SerzhSargsyan’s moral qualities, but as a result of the systemic and staff changes in the army.

NSS- protected SerzhSargsyan’s interests almost until the last moment, performed a number of special acts, including the abduction of NikolPashinyan and deputies.

Authoritative Elite- (Armen Sarkissian, Karen Karapetyan, BakoSahakyan, heads of force structures). It’s notable that the pyramid that seemed so homogeneous and solid before, didn’t unite around SerzhSargsyan in a determinative moment, in fact, not only leaving him alone but putting pressure on him as well. This, perhaps attests the positive changes that were brought by the politicians of the new generation. This, of course, is the good option. And the bad one is that a group of careerists were tired of a ten-year and below-average-efficiency governance of the same person and they tried to use the situation in their own favor [i] and get the real authority for the first time.And only time can show which of the options is closer to the reality. RPA- a quasi-political force that tried to clog up the movement in fear and violence and with the repression formed by the involvement of oligarchic guards, criminal elements and district ragtag. Administrative resources, pressures on employees, dismissal of employees, involvement of instigators (Mashtots Avenue at night) and pressures on students in educational institutes, as it may be, are some of the widely used classic tools of authorities of non-free societies. In the National Assembly, we witnessed obviously false and provocative statements made by the NA republican deputies, statements having only one purpose: persuading the Russian side that all happening in Armenia was nothing, but an anti-Russian movement which at least was a sabotage of interests of one’s own country, and if more straightforward, a betrayal.

Inside this party-called crime-oligarchic club, we, in fact, have the parasitic layer detached from the reality, which still does its best in order to maintain at least a part of its power. The RPA with its tentacles, as a matter of fact, was not a party, but a crime-oligarchic structure that had completely covered the governmental system and almost all the spheres of social life in Armenia.

SerzhSargsyan- the biggest difficulty is the analysis of this person’s actions and intentions, but if we take his greedy desire to stay in power as a pillar, all of his steps are getting explainable by this toolkit. And until accusations concerning  his connections with drugs and casinos are not factually proven, the only logical purpose of staying in power may be considered the overestimating  of his role in the Karabakh issue. It’s quite possible that this person who had lost the touch with the reality during years really believed that the only one who was able to solve the Karabakh issue was him. Anyway, he was ready to do anything to stay in power until the last day. On April 22, according to our information, the issue of declaring a state of emergency was under discussion . And if we add threats of March-first lessons during the negotiations with Pashinyan, the situation becomes more figurative. And there’s no need to observe SerzhSargsyan’s resignation as a knightly step, it was the result of an extreme need of a man who had no other way out: neither the inner circle nor the Russian side  supported him. Perhaps that’s why he seems to consider Pashinyan as the inheritor of the Armenian “throne”.

Activists and demonstration leader staff- the active mass of the society experienced a swift evolution. In the article (Civil Movements and Political Issues) written just two months ago, the problems and challenges risen by me found their worthy solutions, and the society, especially its active and young sector, managed to get  politicized again, set a political agenda and get its solutions. The socially active population  displayed mobility, an ability to take over the situation on the spot, state thinking and organization. The demonstration leader staff , however, excluding a few individuals, is probably the weakest side of the revolution and the future system building. There is a huge lack of intellectual resources.

NikolPashinyan- one of the issues constantly discussed in history is the role of the leader. The odyssey of the movement and the role of its leader likely represent the subject matter of this issue the best. The Armenian revolution and its success, surely, consist of several modules that have different strengths, directions and meanings: many of them are even decisive. But there’s a module in all of this whose impact is more visible and obvious than that of the others: and that module is the leader of the movement. Only the leader’s activity would not have been enough for such kind of victory, but there would be no revolution without Pashinyan. Directing from individual to general, the presence of the right leader is a necessary but not a sufficient condition.

USA, EU- the United Stated and the European Union supported the movement basically by doing nothing, zero engagement was the biggest help for the victory of the revolution as any kind of involvement would bring interference in a chained way from the Russian side and already by the regime. At the same time, some facts are remarkable: France and the USA didn’t congratulate SerzhSargsyan on becoming the Prime Minister which was an unforeseeable breach of tradition, since both are traditionally the first responding countries to the Armenian events. Perhaps the biggest contribution the EU has made over the years was the strengthening of the civil society institutes. This, of course, cannot be considered an interference into Armenia’s affairs. It’s an effort of keeping its borders and neighborhood prosperous and calm which the EU undertakes with all its neighbors , but not always as effective as this time. From the point of view of the Mass Media, the problem is a bit different: the leading media had never been so attentive before and had never been so unequivocal in their assessments over the internal political cases of Armenia, as this time had, and they played a serious role both in disqualifying the regime and preventing it from being used by force.

Russia– maintained neutrality in general. Once more it should be noted that from Armenia there have been a number of attempts carried out by the RPA deputies SerzhSargsyan, Karen Karapetyan to immerse Russia into the political progresses yet all of them have failed. The reason, of course, is not Russia’s sudden respect towards the international law and its subjects, but the plain calculation: Russia has very serious economic, political, military levers on Armenia. Those levers basically let our strategic ally have an influence on Armenia in a necessary amount no matter which political power has reached the executive authority  (on  condition that not the definite pan-Western ones). Given all this, the Kremlin didn’t find it reasonable to carry out the salvation of the rotten-to-its-roots and illegitimate system at the espenseof becoming a rival in the eyes of the majority of the Armenian population.

Azerbaijan- despite fake news regularly spreading in Armenia, no particular frontal activity of the opponent was noticed. This may be connected with two factors: political serious pressure on Azerbaijan from the world power centers. In a likewise case, relaunching of military actions could be explosive for the whole region, everyone realized that Azerbaijan might not be able to  resist the temptation, and therefore they were actively working on it. The second reason, especially after SerzhSargsyan’s resignation, was the noticable nation-wide awakening and the unexpected and rapid rise of moral and psychological state which has a priority importance in such kind of force layout.

Conclusions and Inferences over the Armenian Revolution

First of all, let’s single out  several important conclusions:

Here are some of the worthwhile inferences as well:

1.They didn’t expect such a pace increase of the movement after SerzhSargsyan’s resignation.