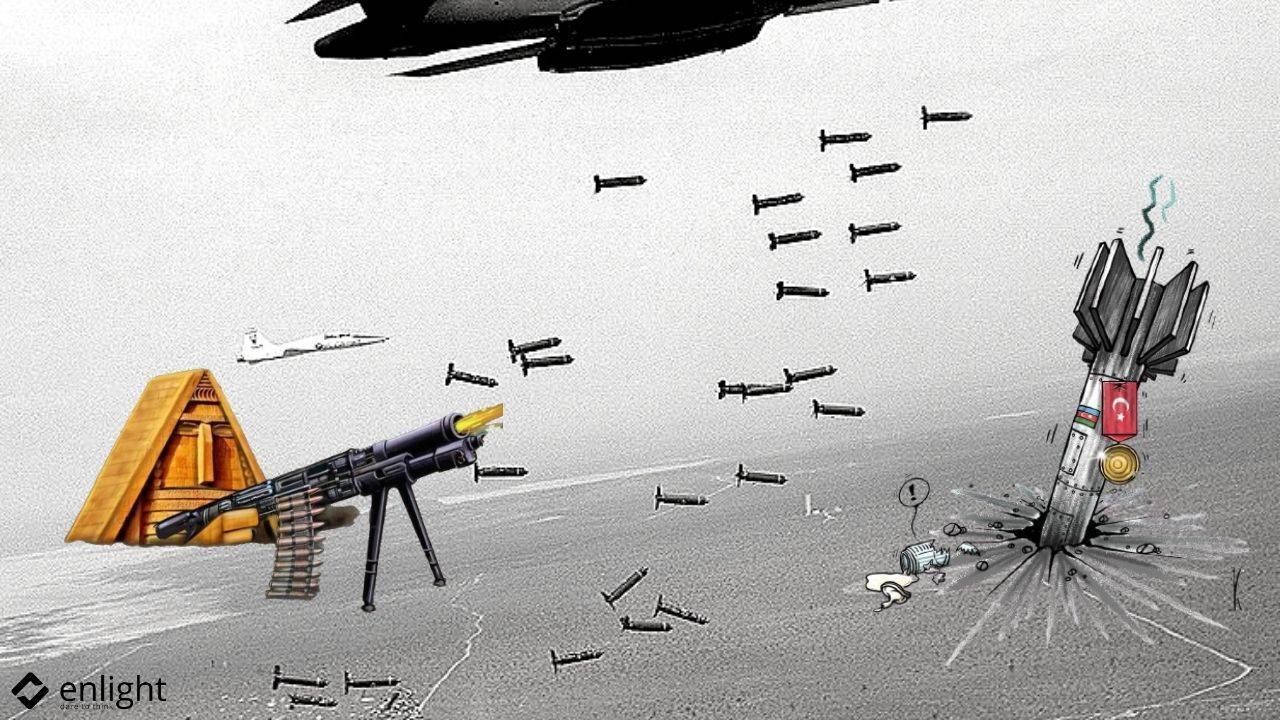 The disagreements over the status of Artsakh between Armenia and Azerbaijan, apart from the military conflict, territorial and positional changes, bring about serious economic problems for both countries. Since the 1994 ceasefire, the countries entered a new phase of the military race, and, as a result, a significant amount of GDP (both in absolute and relative index) was directed and is now being directed to meeting the military needs, acquiring new weapons, reducing the possibility of using these resources in the industrial spheres of economy.

According to the “Stockholm International Peace Research Institute” (SIRPI) regular report, Armenia spent 4.9 percent of the 2019 GDP on the military budget and Azerbaijan spent 4 percent.

The war started on September 27, 2020, brought about a new problem for the conflicting sides: to make new financial allocations for acquiring additional military equipment, that is to say, to redistribute the budget for 2020.

The study of the military budget of the Republic of Armenia in the last 10 years shows that since 2011 it has had stable financial growth. Particularly the financial resources spent during 2011-2020 were doubled, from 142.963 billion AMD  in 2011 to 307.237 billion AMD this year․

On December 6, 2019, the National Assembly of the Republic of Armenia fully adopted the 2020 law of the budget of the Republic of Armenia, according to which 307 billion 236 million AMD were to be allocated to the expenses of the sphere of defence. 302 billion 877 million AMD was planned to direct from the defence budget to the military defence. According to the draft budget of 2020, the defence budget in US dollars is over 640 million (at the exchange rate of January 1).

It’s important to take into account the share of the defence budget in the total budget as well, which will give an opportunity to understand also the focus on the defence sphere and the level of its importance.

The graph shows a continuous increase in allocations from the state budget to the defence sphere, with the exception of certain years (2015, 2016). The increase in the share of budget allocations after 2016 is especially interesting. The largest share of the allocations in the sphere of defence over the entire period under review was provided in 2019.

Dynamics of Azerbaijan’s military expenses from 2011 to 2020

Azerbaijan’s military budget in 2019 was 1 billion 787 million dollars or 864.908 billion drams (at the exchange rate of January 1), $ 812 million or 393.008 billion drams of which was allocated only for the implementation of special defence projects and measures.

It is interesting that on August 12, 2020, the president of Azerbaijan Ilham Aliyev verified the project on making changes in the budget in 2020. These changes were aimed at increasing the expenses on health and social protection, cutting other expenses, including the sphere of defence. According to the new amendments, Azerbaijan plans to cut expenses spent on defence by about 50 million manats, or about 1.3%. Instead of the planned 3 billion 853.5 million manats in 2019, it is planned to allocate 3 billion 804 million manats for defence (2 billion 238 million dollars at the rate of August 12).

The announced purpose of the budget amendments in 2020 is to create a reserve for the defence and security measures, addressing the damages caused by the new coronavirus (COVID-19) and solving other issues that the country is facing.

On September 3, the Ministry of Finance of Azerbaijan published the “Statement on the preliminary indicators of the state budget of 2021”, according to which, in 2021 the 15.3% of the budget expenses will be allocated for defence expenses, that is about 3 billion 954 million manats ($ 2 billion 326 million, at the exchange rate of September 3). According to preliminary data, the expenses are about 150 million manats (about $ 88 million) or 3.9 % more than the amended budget of 2020.

Now let us present the expenses made by Armenia and Azerbaijan in the sphere of defence during the period under review (it should be mentioned that in the case of Armenia we have taken into account the expenses of RA Ministry of Defense, and in the case of Azerbaijan we have taken into account the expenses of the sphere of defence and security that refer not only to the Ministry of Defense but to the State Border Guard Service (SBGS), State Security Service (SSS) and External Intelligence Service (EIS) as well).

Such dynamics of defence allocations and such inequality between the sides, makes us assume that during the period under review Armenia was not mainly guided by the logic of the race of arsenal, but has rather taken steps to ensure national security within its economic capabilities. However, it should be noted that Armenia is trying to reduce the existing inequality by acquiring weapons through interstate loans. In this regard, let us note that the CSTO has created some privileged conditions for the Republic of Armenia in acquiring weapons. Thus, unlike Azerbaijan, Armenia, as a member of the CSTO, has financial privileges in acquiring weapons at domestic prices. But taking into account the circumstance that the economic factor is evidently relevant in the ratio of powers, it should be noted that Armenia is not in a very favourable position. The reason is that the country does not have economic resources and conditions to respond to the oil and petrodollars of Azerbaijan, and its main economic growth is provided by energy resources, especially oil, and in spite of the fact that the fluctuations in oil prices in the global market have led to significant fluctuations in the country’s GDP, long-term energy resources are becoming a key player in this struggle. So, it is becoming more and more important for the Republic of Armenia and Artsakh to develop alternative means of counteraction and improve the already existing ones.

As the Minister of Finance Atom Janjughazyan noted while presenting the bill, the amended budget in 2020 presupposes the expenses to increase by about 40 billion drams ( a little more than $ 80 million), which was not planned according to the budget approved at the beginning of the year. These expenses are mainly connected with martial law in the country. According to studies, a temporary decline in employment, a decrease in demand in the private sector, as well as an increase in uncertainty and risks are expected. As a result, an economic decline of 6.8% is expected in 2020, instead of the 2% expected in April. It is also expected that the nominal GDP will fall to 6 trillion 170.2 billion drams in comparison with 6 trillion 485 billion drams in April. Under unstable conditions, the tax revenues are thought to fall by 35 billion drams or 0.3% of GDP, and the ratio of the government’s debt to GDP will reach about 67%.

The mentioned changes in the budget are aimed at creating conditions for the mobilization of the economy, providing resources for resisting a military attack, as well as ensuring the normal activity of enterprises, government bodies and local government bodies, the security of people in war.

According to another bill, civil servants will be able to direct unused funds from social assistance to support funds for the Armed Forces.

Speaking about the budget bill of 2021, we should note that in spite of the difficulties in the Armenian economy, the budget of 2021 presupposes an increase in capital expenses by 215 billion drams (about $ 450 million).

Although under the conditions of the pandemic and the war, the prediction for economic growth of 5% was replaced by a decline of 6% and then 6.8%, even in this case the government considers it necessary to maintain the volume of capital construction, which will help to create workplaces and strengthen the existing infrastructures of the country (roads, power lines, etc.).

During the discussion on the draft budget, the Minister of Finance reaffirmed the approach that the government does not intend to reduce the current expenses, especially in health, education and social assistance. They will increase compared to 2020, and even compared to the pre-crisis 2019. In particular, compared to 2019, the expenses in the sphere of health will increase by 2.1%, the expenses of the spheres of education and culture by 1.2%. Social security expenses will increase by 2.2% compared to 2020. It is expected that these expenses will be financed by the loans for the replenishment of the budget that the republic receives from the International Monetary Fund (up to $420 million).

Summing up the analysis of the Armenian-Azerbaijani arms race, it should be mentioned that unequal economic conditions and capabilities had and continue to have an obvious impact on the development of unbalanced military resources between the conflicting parties. Although according to international organizations, Armenia spends more of its GDP on defence than Azerbaijan, this does not reflect the reality. In particular, Azerbaijan’s GDP is several times higher than that of Armenia, so the assessment of the countries’ level of armaments cannot be based on the net percentage ratio. The huge amount of petrodollars that Azerbaijan spends on arms acquisition creates an evident advantage for Azerbaijan.

Taking into account the fact that the new war became a new challenge for the country affected by COVID19, Armenia had to face serious economic, financial and military problems. The mobilization of financial resources, the redistribution of the budget and another increase of the state debt in 2021, as the outcome of this stage of war showed, were not enough to solve the mentioned problems.

Although this stage of the military operations can be considered over, still a long time and efforts are required to solve or to mitigate the above-mentioned economic, social, military and now political problems. The war proved that 25 years of activity in these spheres did not provide enough efficiency, and this tripartite agreement creates new risks both for the whole economy at the macro level and for all spheres of state activity in general. Our research was aimed at revealing the ratio of the military expenses of both countries, the problems that emerged during and because of the conflict and the economic problems of the Republic of Armenia because of the new war. This is just a preliminary assessment, the real economic problems, caused by the war, will still be felt in the long run, and the reduction and solution of their consequences will require a deep and comprehensive assessment. This must become the main goal of the economic policymakers because one of the most important basis for stability in all spheres is the economic one.