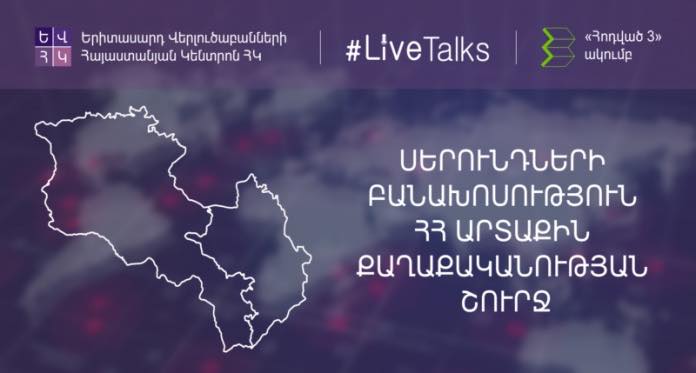 On September 15th, 16th, 23rd, and 24th ACoYA arranged series of interactive discussions in ”Article 3” club named ”Speeches of Generations about Armenia’s Foreign Policy” dedicated to the 26th anniversary of Armenian army. The central aim of this program which is held within #LiveTalks project is to enlarge the knowledge and interest of youth about the country’s foreign policy and through live talks ensure exchanges of views between older and younger generations.

Topics of the four-day speech were the following:

Speeches were followed by discussions, and participants asked the questions they were concerned about.

The participants sharing their impressions of the program, focused on the fact that they had the opportunity to get the answers to the questions they were curious about from the very first hand. Particularly, one of the participants, Arthur Adamyan, noted that the ACoYA has created a good opportunity for young people to get acquainted with the views on the foreign policy of RA of the experts and analysts having a serious impact on the sphere. According to A. Adamyan, the certificate issued by the ACoYA was binding. The speakers of the project drew attention to the fact that young generation is interested in topics like the foundation of basis of Armenia’s statehood and foreign policy, Nagorno-Kharabakh conflict within the context of Armenia’s foreign policy, relations of RA with neighbouring countries, Russia, the USA, EAEU, EU, etc.

As always, the project was free of charge. It gave young people the opportunity to get acquainted with the professional standpoints of experienced speakers, to raise their concerns and get their answers, to study the changes of the foreign policy of RA made during the 26-year independence and the factors that influence that changes, the dynamics of global and regional players, the controversial questions concerning integration processes with EAEU and EU, foreign political developments with reference to Nagorno-Karabakh conflict, etc, and discuss the open questions about foreign policy of RA. All the participants who were present in the four-day program received certificates. The program was broadcasted by a number of media organizations.