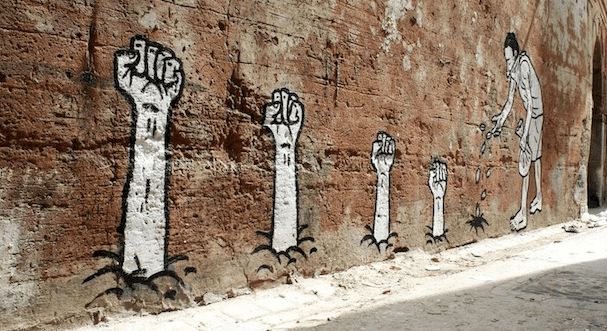 In his ”Postmodernism and Consumer Society” American theorist Fredric Jameson claims that contemporary art operates against society as a critic, a disruptive and opponent power; it was a provocative challenge to the principles that existed in the society of 20th century. And the postmodern art[i] has lost its pretension to change the reality, to opposite and even criticize the old. This is proven by the fact that those works of contemporary art which criticize the society are largely accepted by people. In the following analysis we will view the mentioned fact by trying to understand whether the contemporary art and the artist challenge themselves to criticize or to oppose the existing social norms and rules. In order to reach that aim we will speak about the exhibitions taken place in Yerevan for the last year and introduce some of them as an example. It is important to take into account the fact that the chosen works are not the best ones but the ones that will enable us to discuss the problems in the given analysis.

Artist as an Explorer of the Society
In order to criticize or change the society it is firstly important to understand it. It should be mentioned that the exploration of the society is one of the main aims of contemporary art. Very often an artist is the explorer of the society, we can say has the role of ”sociologist”. As Zhanna Andreasian mentions the aim of sociology as well as of any social sciences or humanities is to revive the human ability of getting surprised-to view the familiar with an unfamiliar eye.
In the conditions of virtualization today’s society comes to a point, where virtual or imaginary reality is more real than the original one. This is called a hyper reality-when there are copied images – simulacra instead of real objects. Those images magnify certain elements or the so called certain ciphers, which seem more real than the originals.
One of the examples of the above mentioned is Mika Vatinian’s ”Description” exhibition about photography that took place in 2016 (20-31 of May). Here, the author surprised observers by trying to decodify one of the ciphers of the society. Let us see what cipher it is.
Vatinyans’s series called ”62 images in Facebook album” introduces photos that tell about photos by describing them. Coming to the photo exhibition the observer gets shocked as they find text instead of photos. The author has got some ”archetype” situations familiar to us, and by emphasizing the elements of familiarity he has viewed them from a completely different angle by changing the technique. One may think that the photos of school party or photos of childhood are as real as the real photos of the same things. This comes to prove what Guy Debord once stated: ”We live in a society where the image is more important than the reality”.

Virtualization or simulacra is only one of the characteristic features of today’s society and an artist not only studies social tendencies but also reflects them in his/her works. According to Jameson in post-industrial, consumer and media society the sense of history and past started to disappear. On the one hand, the main problem of consumer society is to satisfy more and more pleasures; on the other hand, the main function of the media is to empty our mind of the images of the past. It is achieved through the process of giving a 24-hour information on different events from all over the world, as a result of which the society lives in the eternal present as a schizoid. All the mentioned as well as the abundance of information and the advances and changes of life entail the creation of historical amnesia and create a keen sense of the present.
According to Jameson an emphasized keen sense of present is seen in schizoids. There is a connection between the signifier[ii] (it can be a word, a sound or a text) and the signified (the meaning of the word), and schizophrenia is the disability to differentiate the bounds between signifier and signified which is similar to the perception of unconnected signifiers. One of the artists who show that kind of schizoid-reality is Diana Hakobian who has taken the narrative and the moving images out of her video and has put together the portraits of her friends with a turning mechanical device. She then gave a sense of rhythm by adding sound to the images which, however, ”speaks” about the lack of reality through the existing ”emptiness” between voices.

As we have seen postmodern art has a tendency to perceive and reflect the reality and the mentioned examples were only few of those tendencies. Another main aim of postmodern art is the criticism of the reality whereas its ambition to change the reality is not that trustful: the following example will prove it.

In the capitalist and consumer society it is hard to imagine life without instructions as the goods and innovations come to market very quickly, therefore, we all are learners and buying something we read and follow instructions. But those instructions and their manifestations are different.
In her exhibition ”Instigating power” Zhanna Gladko speaks about such modern issues as women’s rights and freedom. In a fabric Gladko wrote the all the imperative verbs and orders his father had given him before leaving home, and then erased them by patching them and replaing with piano chords. This was a tentative to change the pressures towards women in both material and idealistic level. But this exhibition which speaks about freedom starts with these instructions written by the curator: ”Please read and follow these instructions before viewing the exhibition”.

Here the author tries to press the observer and teach how to think and how to realize whatever they see. ”Accept these orders as a necessary thing and be free to leave comments” it says. But after the use of these imperative words we cannot speak about freedom. This shows that both the author and the curator of the exhibition show and criticize the restrictions of freedom and pressures towards people .
But it should be mentioned that the author and the observer are not that interested in the freedom of the observer and women’s rights: what interests them more is the creation of a successful art work that will amaze the observers. This proves the fact that the father of the author let her record his speech in which there was some bite of theatricality which would be absent if she really had a ”dictator” father. Thus, the artist speaks about the themes that are more demanded (here, about women’s rights), that are interesting for people today. This shows that the work of art equals to the level of a simple good with its instructions. Thus, today’s society demands criticism towards patriarchy and in the conditions of supporting it, the criticism loses its effect. Generally, this is a characteristic feature of today’s era, which makes difficult postmodern art’s possibility to be revolutionary no matter its critical character.
For instance, after the exhibition of Marcel Duchamp’s work called ”Fountain” many artists criticized it, saying that a ready-made object cannot be a work of art, and its appearance in a museum was revolutionary because it not only questioned the perceptions about art but also due to the resistance it encountered. And now, more than ever the observer expects to be surprised and his/her imaginations (about art and the reality) should be challenged by different methods both in arts and in ideological level.
David Kareyan’s work ”Ancestors’ call” performance-video which is an anti-national symbol or ”Proud Lips” group exhibition which challenges the social perceptions about sexuality and femininity are examples of the mentioned.
—
To conclude we can mention that today’s exhibitions create the impression that contemporary art has an innovative and revolutionary state and breaks stereotypes having the message of resistance and freedom. But viewing in detail, we come to understand that postmodern art studies society and reality, criticizes some phenomena by recording facts and brings attention to those phenomena by creating possibility for discussion.But considering this art something revolutionary is not right: first of all, the criticism does not face resistance in the sphere of society and artistic circles because the criticism is demanded and the observer goes to an exhibition having in their mind the following question “is this an art or not”and being ready to redefine art. This means there is no challenge, there is an expectation for challenge.

[i] In the analysis postmodern art is equaled to contemporary art.

[ii] For example in the word cat the word, text or sound ”cat” is indicator and the real cat to whom it concerns is the marker.