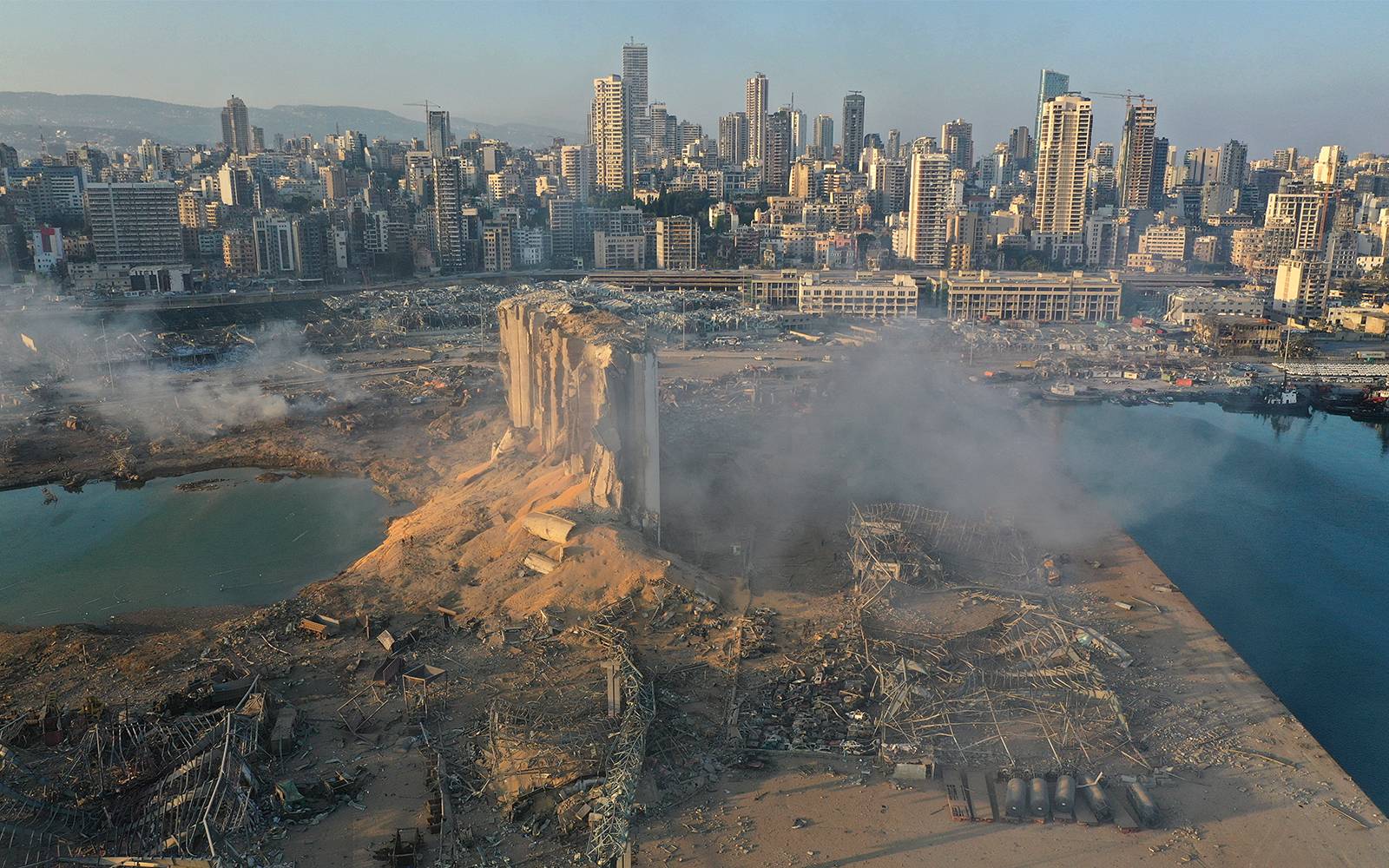 On August 4, the Lebanese satellite news network Al-Mayadeen reported on a powerful explosion in the 12th section of the Port of Beirut at about 6 PM[1]. Lebanese users immediately shared the videos of the explosion on social media[2], in which smoke billowed from the fire, then a powerful explosion occurred, whose shockwave passed 15 km in a few seconds, reaching even the coast of Cyprus.

The Lebanese President convened a meeting of the security council, August 5 was declared a day of mourning and a two-week state of emergency was proclaimed in the country. As of August 7, 154 people are killed (including 13 Armenians), 5,000 are injured (including 250 Armenians), and 300,000 becamehomeless. The intensity of the explosion, according to Armenian scientist Areg Danagoulian, is equal to 10% of the Hiroshima nuclear strike in 1945.

On August 5, the government announced that port officials have been placed under house arrest pending the investigation, reports the USA Today.

Fortunately, no UNESCO-listed World Heritage Sites in Lebanon has been damaged. For example the ruins of the palace of Walid I and the surrounding area in the city of Anjar are in Lebanon, as well as the ancient city of Baalbek.

The Economic Consequences of the Explosion

The tragic explosion, with a magnitude of 4.5 on the Richter scale, was a terrible blow to the economy of a country that has been in a devastating financial and domestic crisis for a long time, adding to it the continuously declining exchange rate and new challenges posed by COVID-19. The port of Beirut, the epicenter of the explosion, is the country’s main transportation hub.

The damage caused to the Lebanese economy and the mitigation of the consequences of this disaster will amount to up to $15 billion, says the financial adviser to Lebanese President, economist Sharbel Kordahi, quoted by Arab News, adding that without international aid, Lebanon cannot face this disaster.

“It [the port – V. S.] was the beating heart of the country, because 80% of the goods imported to Lebanon came here, thus providing economic progress,” says Sami Halabi, co-founder of the “Triangle” Consulting Center in Beirut.

According to the report of the “Triangle” consulting center, in the current situation, the decommissioning of the port is a serious threat to Lebanon’s food security, with 65-85% of food needs being imported through this port. Moreover, on August 4, 15,000 tons of grain stored in the port also exploded.

The second port is in Tripoli, 80 km north of the capital. Although it is significantly smaller than the port of Beirut, it will have to somehow manage the acceptance of the expected huge cargo transportation.

“The port of Tripoli is not ready to receive the imports of vital foodstuffs. There is an exceptional urgency to provide these imports, and the government does not have sufficient international exchange rate to manage that” – adds Halabi.

“Airports and other transportation hubs of the country can facilitate only 30-40% of this trade, and opening the borders with Syria can facilitate another 20%. This means that at least $5 billion of imports will not find their way to the country, and another $2 billion of products won’t be exported in the coming 8 months. This represents a loss of around $4 billion, or 15% of GDP,” – said Kordahi, the president’s financial adviser.

It is still too early to assess the full environmental impact of the blast, but expert Mostapha Raad believes a potentially bigger catastrophe may have been averted if the wind carried away a toxic cloud filled with ammonium nitrate from land toward the sea.

We were afraid the ammonium nitrate residue would lead to cooling off the weather and causing acidic rain, but according to tests on air samples, the result was green and the cloud disappeared over the sea,’’ concluded Raad, quotes Arab News.

Immediately after the explosion, the citizens’ and official preliminary versions have circulated.

Citizens’: Some local residents told on their personal pages and to journalists, who arrived at the epicenter of the incident, that they had heard the sound of helicopter(s) flying before the incident, assuming that the blast was the result of an enemy air attack (i.e. Israel).

Official: The blast may have been caused by the detonation of explosives stored in the harbor. This view was also shared by Director-General of Lebanese Customs Badri Daher, but the Head of General Security, Major General Abbas Ibrahim, told Al-Mayadeen that the chemicals that caused the blast had been seized some time ago, therefore an immediate inquest was needed to confirm the allegations[4]. Health Minister Hamad Hassan told the local media that a ship carrying fireworks had blown up[5].

USA: The US Embassy in Lebanon announced on its official Twitter microblog that the US government will provide $17 million in extra emergency aid.

Artsakh: On his Facebook page, President Arayik Harutyunyan supported the Lebanese people and our compatriots on behalf of the government and himself, noting that he is in constant contact with the Permanent Representation of Artsakh to the Middle East, the RA Embassy in Lebanon and the Armenian community[6]. On his Facebook page, NA President Artur Tovmasyan expressed condolences on behalf of the Artsakh Parliament and himself to the Lebanese government and the people, among whom are our compatriots[7].

European Commission: The assistance amounts to € 33 million for urgent needs, medical equipment, as well as for the protection of Beirut’s vital infrastructure. At the briefing in Brussels on August 7 European Commission spokesman Eric Mamer informed that an international video conference of Lebanese aid donors would be held on Sunday, August 9.

Iran: One of the main allies of Lebanon. President Hassan Rouhani has instructed the Iranian Red Crescent to take immediate steps to send humanitarian aid to Lebanon. The worldly and spiritual leaders of Iran delivered messages of support and usefulness. An Iranian field hospital was established in Beirut, a 37-member medical staff consisting of surgeons, orthopedists, pediatricians, anesthesiologists, neurologists etc. was sent. On August 5 and 6, there were already deliveries to Beirut, mainly in the form of medicine and food.

Israel: Hours after the explosion, Jerusalem announced officially that it had nothing to do with the Beirut blast and offered its humanitarian assistance to Lebanon through international organizations. Moreover, the Municipality of Tel Aviv was illuminated with the Lebanese national flag as a sign of support for the Lebanese people. In his speech before the Israeli parliament, the country’s Prime Minister Benjamin Netanyahu commented: “We are not fighting against the people of Lebanon or Iran, but against their governments.” The Lebanese authorities, however, rejected the offer, reasoning that “they do not need any help from the enemy.”

Republic of Armenia: The executive, legislative, and spiritual bodies’ highest leadership have sent condolence messages  to “stand by the brotherly Lebanese people and support them.” On August 5, RA Foreign Ministry Spokeswoman Anna Naghdalyan posted on Facebook that a working group had been set up at the Foreign Ministry to coordinate the provision of targeted assistance to Lebanon with the Lebanese Crisis Organization[8]. The RA Prime Minister’s Press Speaker Mane Gevorgyan informed on the same day that the assistance to be sent from Armenia to Lebanon will be in the form of medicine, medical equipment, food etc. [9]. At the Session of the Executive on August 6, RA Deputy Prime Minister Tigran Avinyan told that the emergency aid will arrive in Lebanon by a special flight scheduled for the evening of August 8.

On August 7, during a working discussion convened by RA Prime Minister Nikol Pashinyan, it became known that humanitarian aid would arrive by 3 airplanes. The first plane will transfer 12 tons of medicine, food and other necessary items. In the week of August 10, the other two planes will depart, as well as a delegation consisting of representatives of the government, the National Assembly and the “Hayastan” All-Armenian Fund.

Russian Federation: The Ministry of Emergency Situations will send 5 humanitarian aid planes to Lebanon, 3 of which already landed in Beirut late in the evening of August 6, bringing operative groups of Russian doctors, psychologists and rescuers, totally about 150 people. Assistance includes the Aeromobile Hospital, experts from the Russian Federal Service for Surveillance on Consumer Rights Protection and Human Well-being (Роспотребнадзор – V. S..), and the COVID-19 Detection Laboratory[11]. The hospital plans to provide outpatient care to up to 200 victims per day, and inpatient care to 50 victims [12].

Czech Republic: Deputy Prime Minister and Minister of Internal Affairs Jan Hamachek announced on his Twitter microblog: “The Czech Republic will send a detachment of 37 rescuers (including 5 rescue-cynologists) to Beirut for help.”[13]

France: Emmanuel Macron is the first foreign president to visit Beirut on August 6 to meet the residents of the worst-hit areas. At the same time, two French planes arrived in Beirut, bringing with them special rescue personnel and basic necessities. During the press conference at the end of the visit, the French President reaffirmed his readiness to provide ongoing assistance, he also stressed the urgency for large-scale reforms in the country by the Lebanese government.

In addition to state and international support, many world-famous individuals have expressed their practical readiness and support.

American actor George Clooney and his wife will donate $100,000 to Lebanese charities. Let us remind that Clooney’s wife is Amal Clooney, an international lawyer of Lebanese descent.

The Losses of the Lebanese-Armenian Community

The Lebanese-Armenian community suffered both major material and, unfortunately, human losses. It was already mentioned in the beginning, that as of August 7, 13 Armenians had been killed (including Nazar Najarian, General Secretary of the Party “Kataeb”). The Catholicosate of Antelias (particularly the Cathedral, the Residence, the doors, chandeliers, windows of the Cilicia Museum of Armenological and Pedagogical Centers[15]), the building of the RA Embassy in Lebanon, the only Haigazian University of the Diaspora, a number of churches, offices and cultural institutions were damaged. In a conversation with Armenpress, the editor of “Azdak” daily newspaper Shahan Kandaharian said that such an explosion had never taken place during the Lebanese civil war[16].