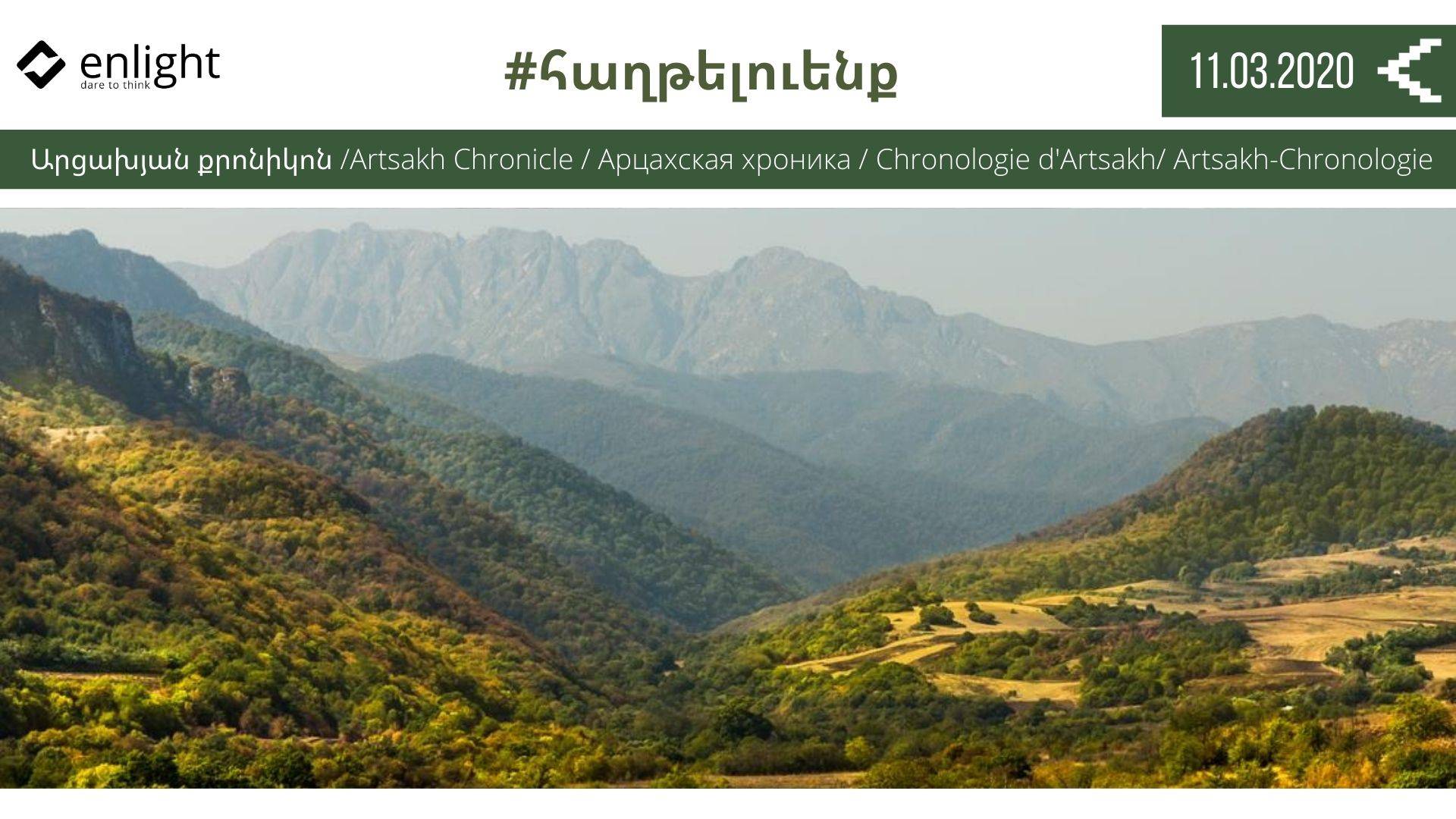 The situation in peaceful settlements is relatively calm at the moment.

The UN High Commissioner for Human Rights has warned of possible war crimes in the ongoing fighting between Armenia and Azerbaijan in the Nagorno-Karabakh conflict zone. Michelle Bachelet on Monday expressed alarm at continuing indiscriminate attacks in populated areas in and around the border region, in contravention of international humanitarian law, despite a recent agreement by the two sides. “Since the conflict reignited in September with the terrible consequences we are now seeing, there have been repeated calls, including by myself, for the parties to take all feasible steps to avoid, or at the very least minimize, the loss of civilian life and damage to civilian infrastructure, including schools and hospitals – as well as to distinguish civilians from combatants, and civilian objects from military objectives,” she said.

Over the night of November 2-3, civilian settlements remained in relative calm. However, at dawn the Azerbaijanis resumed operations whike opening fire on the towns of Martuni and Shushi from “Smerch” rocket batteries. No casualties have been reported. The situation in other settlements remains relatively calm.

Throughout the night of November 2 -3, The DA units have conducted defensive combat in the eastern, southeastern, and southern directions. In those sectors, the friendly forces have detected and destroyed with accurate fire enemy soft-skinned vehicles, manpower, and one main battle tank. Given tactical considerations, the DA units have pulled out at certain small sectors of the FEBA in the eastern direction and have occupied more favorable lines for follow-up operations. In the morning, the Defense Army has dealt with accurate fire blows the hostile equipment and manpower attempting an advance – inflicting losses and throwing them back to forming-up positions. The army units have also suppressed the enemy poised for an attack in the northern direction. At this moment, the hostile force continues attempts at bending the tactical advantage to its favor. The DA controls the operational and tactical situation.

A new weapon fired by the enemy forces appeared in the territory of the Artsakh Republic. The study revealed that it was a weapon with a length of about 40 cm, the use of which is prohibited for the civilian population in accordance with the Geneva and other international conventions. This weapon is intended for mass destruction and comprehensive arson.

The fighting in the eastern direction of Artsakh continues. Enemy troops have great losses.

The statement of the Azerbaijani side that the Armenian Armed Forces allegedly fired at the city of Fizuli and nearby villages from the Smerch multiple launch rocket system is fake. No fire was fired from the territory of Armenia in the prior mentioned direction.

The enemy forces elimination operations continue As a result of the combat operations over the past days, as well as ongoing actions in the south-eastern direction of the forward edge of the battle area (Shekher-Karmir Shuka – Taghavard line), the Defense Army forces and volunteer troops unleashed a living “hell” on the adversary in forests and gorges. The hostile terrorist groups and special operations units have suffered and continue suffering heavy manpower and equipment losses. Presently reconnoitering and fire engagement operations continue in the areas of the deployment of the enemy forces.

In the Karvachar area, at 1:30 pm, Azerbaijan fired smoke bombs and tried to remove the corpses of the soldiers that they had lost in the valley the previous day. However, the Armenian side used precise artillery fire and bombs to repel the adversary, which left two dead bodies. In the same area, at 1:40 pm, Azerbaijani forces used smoke cover to try and penetrate the frontline using a group of 30 people. In this case as well, the Defence Army units used precise artillery fire to neutralize this attempted advance, causing the adversary to suffer losses and retreat. At 2:30 pm, an accumulation of Azerbaijani forces was noted in battle positions in Karvachar. Our forces took the necessary measures to destroy 4 soldiers and prevent this attempt at consolidation. The tactical situation in both Karvachar and on other fronts remains under the control of the Defence Army units.

The Azerbaijani side launched artillery fire in the direction of the Armenian units. Several artillery projectiles fell in the territory of Iran.

Along with the hostilities, Azerbaijani forces continued to shell the settlements. Throughout the day , the adversary forces used military aviation in the direction of Martuni, and shelled the city of Shushi. In Shahumyan region, MLRS missiles were used. According to preliminary data, there are no victims.

The most intensive engagements have been particularly taking place in the eastern and south-eastern directions of the forward edge of the battle area. The Defense Army subdivisions keep inflicting manpower and equipment losses to the enemy with skillful actions: in particular, at 2.10 p.m. in eastern direction the defense army units destroyed 2 enemy tanks and captured 1 infantry fighting vehicle.

Yesterday’s terrorist attack in Vienna, Austria has once again attested to the fact that in no way could the world community afford selective approaches in the fight against international terrorism, as it is the greatest menace to mankind in our times. No state is immune to terrorism, and I believe terrorism must not be associated with any particular civilization, religion, nationality or ethnic group. We express our deep sympathies and condolences to the families of victims of the terrorist attacks and wish the wounded speedy recovery. It has been more than a month that in full view of the international community Artsakh became a target of terrorism, combating aspirations and attempts of Azerbaijan and Turkey to turn the South Caucasus into a new hotbed of international terrorism. The Republic of Artsakh faces terrorism and crimes against humanity, suffering human and tangible material loss. We strongly condemn any attempt whereby communities are subjected to terrorism, and the civilian population is targeted deliberately on the grounds of ethnic or religious belonging. Any attempt to justify those encouraging, sponsoring or perpetrating terrorism and extremism, as well as those inciting hate crime and violence, should be unequivocally condemned. The Republic of Artsakh remains committed to those principles and determined to contribute to the fight against terrorism, reinforcing international and regional security, and we will struggle to the end for our right to secure life and development.

Stepanakert was shelled a while ago. According to preliminary data, there is one victim. The Azerbaijani-Turkish forces fired a rocket from the “Smerch” MRL system in the direction of Stepanakert’s Mother and Child’s Healthcare Center. According to preliminary data, one citizen was wounded here. He was taken to the hospital. The enemy targeted a residential area. As a result of it a garage and a car burned, causing significant damage to nearby residential houses. Three “Smerch” rockets were fired in the direction of Shushi. Two residential houses are on fire here at the moment. Fire fighters are working on the spot. The information about the victims is being clarified.

Today Foreign Minister of Russia Sergey Lavrov made an interesting announcment, noting that the number of the terrorists deployed in the region comes near 2000. I want to assure Mr. Lavrov that during this anti-terrorism campaign we were able to eliminate over half of those terrorists (they have been killed or injured), while in the near future more decisive measures will be taken to eliminate all those who have remained alive.